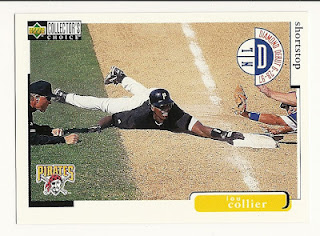 Baseball pundits will do just about anything to have their sport reinstated into the Olympics after being ousted from the 2012 games.  Baseball and softball reside with Polo as being the only sports being voted out of Olympic Competition.  Any comparison with Polo, can't be a good thing.

That is where innovator and visionary Lou Collier draws the line, the third base line that is.  Along with other "retired" players of the 90's Lou is working to resurrect their careers and their sport.  Lawrence Orback, President of the The World United Synchronized Sports Entente (pronounced Wuss-ee) has given his full support to the Synchronized Baseball founder.

Orback released a statement after confidential training photos of Collier's Synchronized Baseball baseball team were leaked to the press.

It read:
I personally understand the trials and tribulations that come from being a sports pioneer.  I was laughed at, mocked, spit on and beaten severely on many occasions, but my passion would not be thwarted.  I rose above the nay sayers and critics and have made W.U.S.S.E. the most powerful synchro organization in the World, albeit the only one.
I have the utmost respect for Lou and hav confidence that he can overcome this security lapse in order to perfect his craft.

I am no synchro connoisseur but it looks as if there is a lot of work to do.  The glove completely missed the corner of the bag and the standing teammates are facing in opposite directions.  Very amateurish.  So much work to be done, but they have two years before the Olympic Committee will make their rulings for the 2016 games in Rio.

Rumors have stirred that many former professional baseball players will be participating in Synchro-Ball as they are calling it.  Tim Raines, Otis Nixon, Tim Teuffel and Royce Clayton are rumored to be in the lightweight division, while Cecil Fielder and John Kruk will be anchoring the heavyweights.

Gerald Orback has mentioned coming out of retirement to add a little star power to the men's Synchro-ball team.  We advise he put a shirt on first. 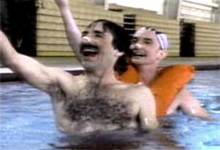 If only this were actually true.  I love the Olympics and am sure I would stay up until 5am to watch Synchro-Ball.  Please make sure to go vote for me in Nachos Grande's contest.  I will let you know when voting goes live.
at 10:43 PM