I had a great time at The National and made a ton of great pickups.  I have two still left to show and they are my favorites.

The same friend that helped me with Frank Robinson, Brooks Robinson and Cal Ripken Jr., had a couple more tricks up his sleeve. 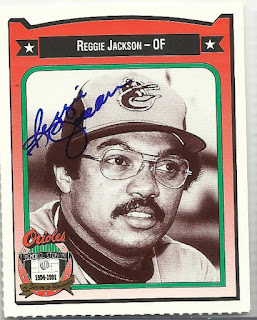 The Orioles served as the bridge between Reggie's two most remembered franchises.  The Orioles traded for Reggie in 1976, hoping to make another push to the World Series before free agency pulled him away.  Unfortunately, the Birds finished second in their division and Reggie would not make Baltimore a long term stay.
Not much to say about Reggie as an Oriole, just another Hall of Famer crossed off the list.  ﻿
at 9:23 PM