My second day at the National and my second day spending less than $10.  And I couldn't be happier.  I have had a blast sitting and looking through thousands of autographs for the gems I need to fill my collection.  Yesterday I brought three more of those gems home.  I have my eye on many more and am hoping to get some good deals as the show progresses. 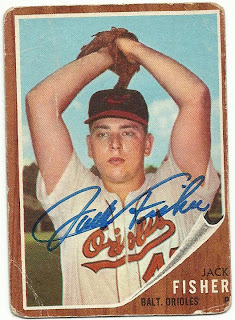 My curiosity helped me land this well loved beauty.  At the booth, they were moving a ton of bats and I was being nosy, trying to see who they were for.  I couldn't tell, but I found a small box of autos on the table.  There was a second Fisher, as a Met, much less loved but it wouldn't do.  A few creases and absolutely zero corners is perfect and the price could not be beat.  I even talked them down a buck, every bit helps. 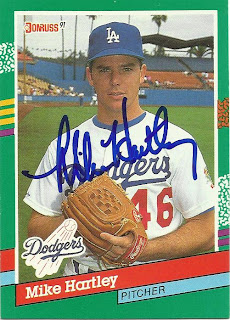 Mike Hartley only appeared in 3 games for the Orioles in 1995 to end his major league career.  He was lights out but never pitched again in the majors.  He took a year off in 1996, came back in 1997 and then retired.  Then eight years later he made a start for the Mesa Miners, not a great day.  He coached in the U.S. for three years and then moved across the pond.  He has coached German professional baseball, the Croatian National team and now in Italian professional baseball.  Difficult to track down a European nomad. 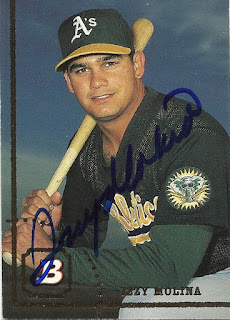 What happened on May 6, 2002 in Baltimore Maryland?  Hint: it has to do with Izzy Molina.

Answer, Izzy Molina played in his one and only game as a Baltimore Oriole.  He went 1-3 in a 9-4 Orioles loss at the hands of the Cleveland Indians.  He also drove in a run on his only hit.  He stayed in the Orioles organization until his retirement in 2003.  This Bowman card is one of only two major releases, both with the Athletics.