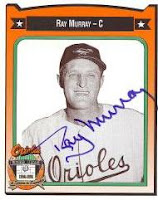 Murray made his debut with the Cleveland Indians in 1948 during their championship run, but his 4 games were not in the playoffs and he did not earn a ring. He spent the next 5 years working his way toward Baltimore, garnering a reputation for a strong arm behind the plate and stronger personality.

He was dubbed "Deacon" becuase of how he would preach to umpires about calls that didn't go his way. He even went so far as to remove all of his gear on the field, kneel behind home plate and pray for the umpire to to regain his sight and no longer be blind. He was promptly ejected from the game. Well deserved, but quite original.

His last season in baseball was the Orioles first in Baltimore, 1954. Murray hit a modest .246 but threw out over 45% of would be base stealers. His final game came on September 25, 1954, exactly 57 years ago. Ray went 2-4 with a double in the 11-0 loss to the Chicago White Sox. He was the lone bright spot in an otherwise dreadful game.

I made a contact at this years FanFest that has proven to be a big help with my collection. His name is Derrick and he is a autograph hound. He goes by the name Scoreset, because he is trying to complete the colorful 1988 Score set, autograph style. He hits up a ton of minor league games on the East Coast and is always willing to help out. He did just that this season for me. 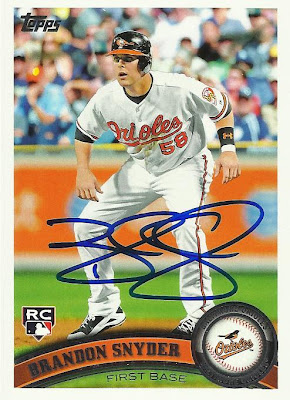 I will always lean toward either a TTM or IP autograph over a certified autograph because of the personal touch. This bad boy replaces the card of this kid: 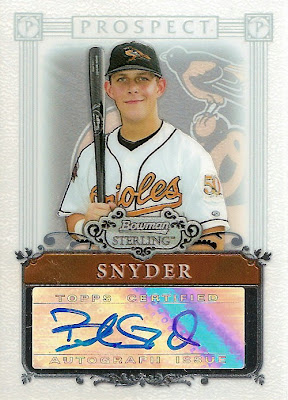 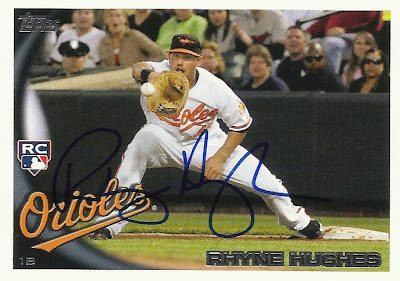 One of which is for trade if anyone is interested. 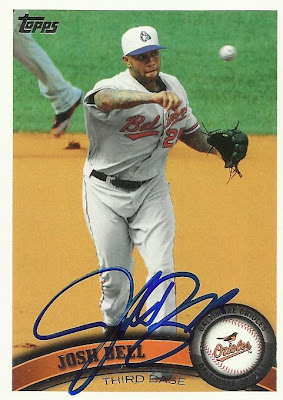 This is my favorite of the two and it will be supplanting my Orioles Postcard. 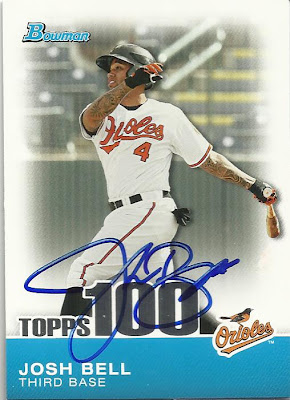 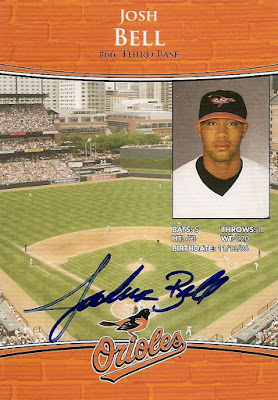 Please let me know if you see anything you like, always looking to make a trade.
at 6:10 PM No comments:

Keeping with the trend of Managers signing TTM requests after their season ends, I give you, Aaron Ledesma. 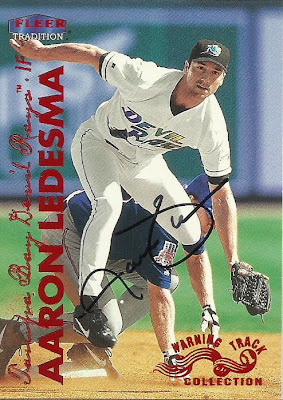 When I sent this card to Aaron, I thought its return would allow me to cross him from the list for good. But then I got my request back and checked Beckett before writing this post. Pacific produced a card in 1998 featuring Ledesma as an Oriole. Damn. Well at least I know he signs, so all I need to do is get my hands on 1998 Pacific #27. Anyone got one? I would prefer not have to buy it from COMC or Sportlots.

Ledesma showed a tremendous amount of promise during his lone season in Baltimore. He hit .352 in only his second major league season and was a good piece to the Orioles infield puzzle. Unfortunately, the Tampa Bay Devil Rays joined the American League after 1997 and snatched him up. He hit .320 his first season in Tampa before falling off during his third season. His final big league season was in 2000 as a Colorado Rockie. He made one final attempt to reach the bigs in 2002 as an Independant Long Island Duck, with little success.

Ledesma then moved on to the next chapter in his life, coaching. Unfortunately, his success has been within the Yankee organization. In 2008 he was the hitting instructor for their Class-A affiliate. 2009-10 saw him as the hitting coach for AAA Scranton-Wilkes Barre before getting his first managerial gig. The mail travels slowly to the Charleston Riverdogs, this success took seven months.
at 5:15 PM No comments:

The Billings Mustangs finished their 2011 campaign in the Arizona Fall League on Thursday September 8th with a 2-1 win. Shortly thereafter Eli Marrero sent back my TTM request. The postmark was September 9, so I guess he signed everything following the season.

As the hitting instructor, his team finished with the best record in their division, and mised the Playoffs. A weird loop hole left them on the outside looking in. This glitch gave Eli a little more free time to sign a card for me. 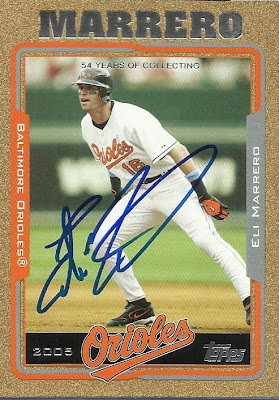 Eli will always be remembered as a St. Louis Cardinal, having spent the first seven of his ten Major League seasons in the Midwest. Cardinal fans will remember him as part of the trade that brought Adam Wainwright to their club. Orioles fans will not remember him.

He spent 22 games in Baltimore during the 2005 season, only getting 56 plate appearances. His average barely crested .200 but he made the most of his minimal time. Eight of his eleven hits were for extra bases. He reached base 15 times and scored 9 runs, while driving in 11 runs. His few games did allow for Topps to put him in their update set as a Bird.
Beckett lists him as an Oriole in th 2006 Topps Opening Day Autograph set, but I can't find a picture of it anywhere. He was released in October so definitely shouldn't have been an Oriole. Probably just another Beckett mistake.

Happy to cross this name off the list. After his retirement he was off the grid, only popping up in Billings this year. I wasn't very optomistic, just hopeful.
at 3:33 PM 1 comment:

Did You Miss Me?

Probably not, but I have missed the blogosphere. In the middle of work, trying to sell my home and taking care of a pregnant wife, I went on vacation. My first actual vacation since my honeymoon 2 years ago.

Wifey and I spent 10 days in the West Virginia mountains with awful cell service and worse internet availability. So we "unplugged". But that could only last for so long. Consider me plugged back in.

Watch out blogosphere.
at 3:22 PM No comments: