I had made some decent sized purchases, picking up a bunch of cards at a time, that cost a pretty penny.  But I was torn on how to make my mark on Saturday at the National.  Did I want to bust some wax?  Damn right I did.  The thought of pulling a game changer at the Convention was almost too much to overcome.  But I did overcome the urge.  I instead bought up a few tough to come by vintage Orioles autographs, three to be exact. 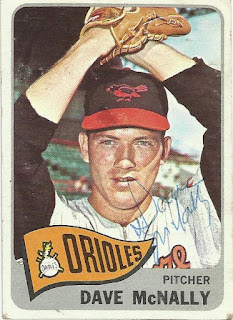 I love researching the players that played for the Birds during their hay-day.  I knew they were good, maybe even great and had amazing players.  I knew of the four 20 game winners (Cuellar, McNally, Palmer and Dobson), the 1966 World Series sweep.

What I didn't know is that Dave McNally is in the Hall of Fame.  Or at least his bat is.  OK, it's Curt Motton's bat.  McNally used Curt Motton's bat to hit the only Grand Slam in World Series history.  See what pitchers could do before the Designated Hitter?  They were athletes.  Ballplayers.  Not just coddled premadonnas.

This card was the first of my expensive purchase from Rich Altman and Hollywood Collectibles.
at 9:49 PM