Friday morning at the National started like the first two, checking autograph lists and looking through binders of signatures.  After three hours I headed to the VIP lounge (large conference room only with tables and chairs) to develop my plan of attack.

I decided to start small.  Knock off a few of the little guys and get in the habit of crossing names off the list.  I went to a small vendor I saw on Wednesday to grab my two needs.  He was very organized, with lists of every autograph in team and alphabetical order.

It took longer to pay than it did to find my cards. 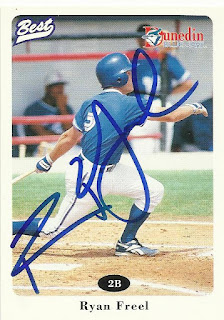 Freel just recently retired and I have not tested his signing habits even though I have some Orioles cards of him.  I figured for a couple of bucks, no problem picking it up. 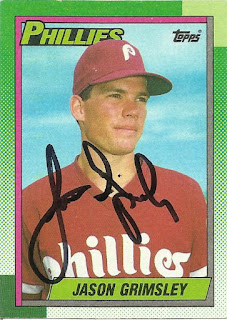 Until writing this post I believed Grimsley never appeared on a card as an Oriole.  I overlooked the monster set and multiple cards of 2005 Topps Total.  He appears with B.J. Ryan on card #673, and I need it.  Then I need to get it signed.  Until then this youngster will have to do.

I have decided to break up my haul my vendor.  I will try and give them the props for their inventory and have scheduled posts for a while.
at 12:00 PM