Main Line Autographs was the last booth I saw on Wednesday evening.  I didn't have enough time to sit down and look over their thousands of autographs.  So Thursday I spent more than four hours looking over their binders.

One of the few purchases I made on Friday were these four well thought out additions to my collection, and the only upgrade of the entire show. 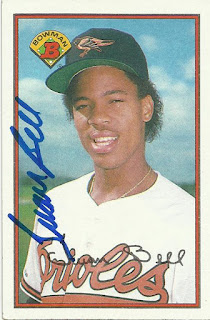 I had thought about picking up a Juan Bell autograph many times before and never pulled the trigger.  I couldn't pass up a $1 opportunity to add someone who never signs TTM.  I will be trying a few creative ways to reach him TTM.  We shall see if if they are successful or not. 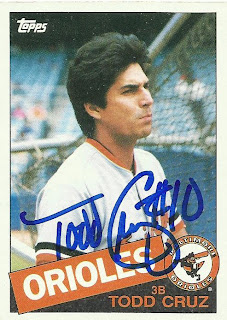 This is the only upgrade from the entire show.  I thought really hard about picking this up or not and the signature made me get it.  His signature is awesome and the blue truly pops off of his jersey.  There is now a very nice 1983 Fleer card of Todd as a Mariner available for trade. 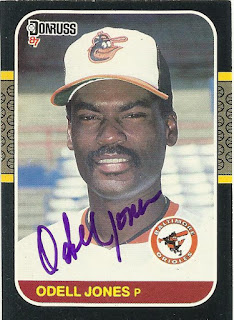 I screwed up a couple months back and missed an opportunity to have Odell sign for me through a private signing with Chris Potter Sports.  I still have the crown card and wil work on Odell in the future, possibly another private signing.  I enjoy the pre-game photographs on cards.  Canned studio portrait shots don't belong in major release issues. 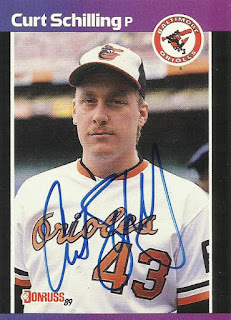 Does this guy look like one of the most dominant pitchers of the late 90's and early 2000's?  Nope.  He looks more like a High School histoy teacher.  Everyone knows about the worst trade in the history of the franchise, so I wont rehash that.  But, Curt wasn't exactly tearing it up in his three seasons.  They thought they were trading a relief pitcher with good stuff to help a bullpen.  That was his best role in Baltimore, a reliever. He was very not good as a starter.  I got such a good deal on this card I was able to overlook the fact it is not a Crown card. 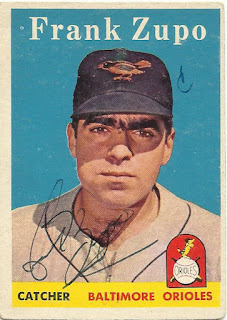 Wally Moon is know for his eyebrows, but people are sleeping on Mr. Zupo here.  Had he played more than 16 games in his career and collected more than three hits, he would be the Eyebrow King.  Hands down.  His limited experience and time in the majors allowed for only thins card to be produced during his career.  He appears in the 1991 Crown set, but I have only seen that particular card signed once before.  Guees who has it?  He does.
at 7:40 PM