Not In My House!

Today, Roger Goodell and the NFL levied heavy fines and sanctions on the New Orleans Saints, their coaching staff and their executives. Similar sanctions will soon be levied on their players as well.

Roger Goodell has spoken. The sports-world has heard him loud and clear. "Don't F*&k with ME." Message received. But the sports-world is responding. Social media is exploding with comments and tweets. Talk radio will have months worth of material now that Peyton has landed and Tebow is on his way out in Denver.

The severity of the sanctions are being judged from all angles. Most deem the punishment too severe and not commensurate with the accused crimes. Others still are even questioning any wrong doing by the Saints.

Goodell himself has been questioned as to his ego and motives in this case. Many believe he is putting himself above the game. Playing God.

Be beyond reproach, the moral North. The man who answers to no one. Do what is necessary to make the sport the best it can be. Do whatever it takes to protect the shield.

I disagree with the punishments and how it was handled but here is my take on the whole deal.

Bounties have been a part of football for years, just as cheating and steroids was a part of baseball. Goodell is determined to not repeat history. "Bounty-gate" may not have the societal implications of steroid use, but violent actions and human safety are still hot-button issues.

Roger Goodell does not want to be Bud Selig. Selig sat idly by and let the actions of his people erode the confidence in the game he loves. Steroids ripped a hole in baseball that may never fully mend. Bud Selig was the man on top during that time and will forever be linked to this dark period in baseball. Goodell was not going to suffer the same fate.

He would not wait for a bounty go awry and turn a running back into a quadriplegic before addressing the issue. He had to act. Swiftly. Decisively. Harshly. Set an example and tell every team in the league that bounties will not be tolerated. It is his "steroid issue" and he took action.

Selig must be cursing under his breath today, wishing he had the balls to change his sport. Before the damage was done.
at 7:18 PM No comments:

I rarely talk about anything other than basebal, but I have to divert from the path today.

I took a half day from work today, not for college basketball, but because I get a half day when I work Saturdays. The NCAA tournament was a pleasant bonus.

I didn't fill out a bracket this year, so I have no monetary ties to this tournament.

I watched the (16)UNC Asheville vs. (1)Syracuse and was amazed at what I saw. The 16 seed utplayed Syracuse all game and got hosed. I repeat, HOSED.

A clear goaltend against Syracuse went uncalled. I mean, the ball hit the backboard on a layup, then was swatted away. +2 for UNC.

A lane violation on a Syracuse foul shot. -2 for Syracuse.

Another ball thrown out of bounds by the Orange, yet they were still awarded possession. Unsure how they blew this one. Probably the worst call I have ever seen as far as possession goes. Syracuse then hits two free throws, -2 Syracuse.

That six point swing would have changed the game drastically. The referees should be ashamed at their calls. I am not sure if Asheville could have won, but they were not given a chance in the last 5 minutes.

Damn, I just love the underdog. Bring on Cinderella.
at 5:38 PM No comments:

I feel like I keep repeating myself with my trade packages. Ryan from The Great Orioles Autograph Project continues to help out my fledgeling collection. I have lost track as to how many trades we have made, I am guessing six. Sounds good to me. 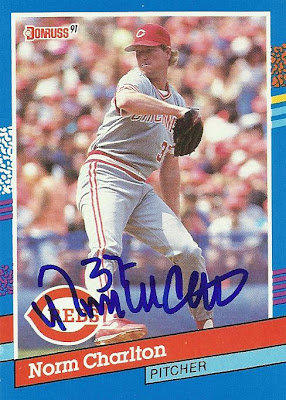 My favorite of the "Nasty Boys". Why? Because he is the only one crossed off my list. Dibble never came to Baltimore and Randy Myers has something against sharpies. Now all I need is an Oriole variety. 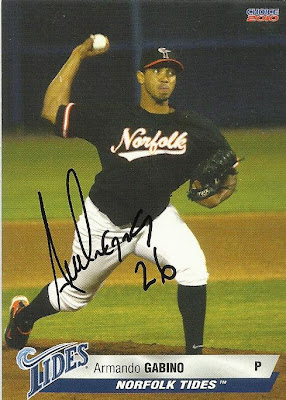 Why do role players insist on putting their numbers with their autographs? Gabino's 26 means nothing. He wore 41 for the big club. Ripken's #8 I get. This, not so much. 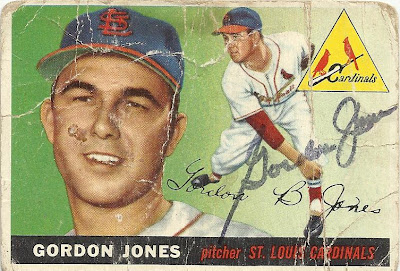 By far my favorite card of this deal. It is just as rough as the scan shows and I love every crese and bend in it. The faded autograph is a perfect match to the fascimile on the front. 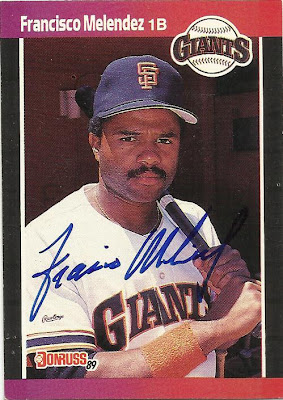 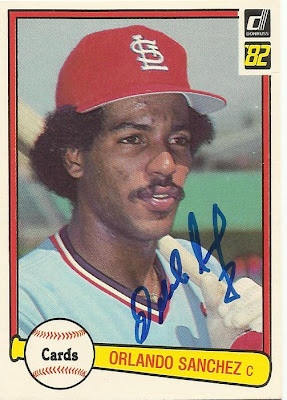 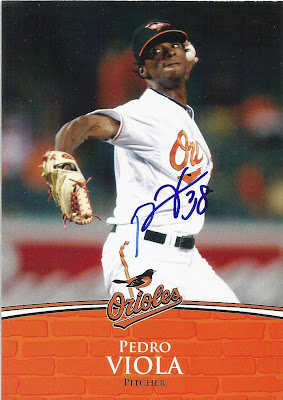 The only Orioles card of the bunch and no upgrade needed. His signature is only an extended PV with a number. It leaves a lot to be desired
at 8:47 PM 1 comment:

Yesterday Wifey's family held an awesome baby shower for our soon to be addition. Our friends and family went well above and beyond for us. I can't thank them enough for all the stuff we brought home. I had to snag a minivan and put down all the seats just to make everything fit.

We received a lot of sports related toys and clothes but one piece stood out. 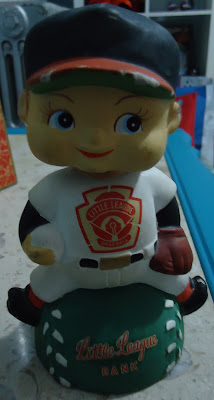 My mother-in-law insisted it be paced in the baby's room. Too much stuff in there already. So I made room in the cave, right in between my Cal Ripken Bobbleheads.

The cool part about this bobble is that it is made of paper mache. Not plaster or porcelain, hardened paper. There are a few character building chips in the bill of his hat and a small crack, but those merely add to the piece. Oh, it's a coin bank as well. By far the best gift.
at 3:43 PM 2 comments:

2012 Orioles season tickets arrived this week, bringing with them excitement, anticipation, hope and a little fear. Excitement, anticipation and hope are staples in the dillusional O's fan handbag. Those I am used to, the fear, I am not. Wifey is due April 12th, Opening Day is April 6th. See why I am afraid?

If she pops a little early, no Opening Day. If she goes full term, maybe no Opening Day. Or worse yet, a bleacher baby. The only way to ensure Opening Day is OK, a four week early baby. Not sure I want to be wishing for that. My gut says my son will be born on April 6, 2012. Say 3:05pm.

Got me thinking about a few other tickets I have gathered up.

I have an extra of the Camden Yards Opening Day ticket if anyone is looking to add one to their collection. Just let me know.
at 12:01 PM 2 comments:

The Gift That Keeps on Giving

Nope, not Herpes, this years FanFest.

I cleaned up with a lot of players I needed but couldn't hit every station, I had to draw the line somewhere. One of the few players I missed was Mark Reynolds. When I got a text this week asking for my address I remembered a friend helped me with Reynolds. I'm not even sure I gave him a card or not.

Now I am indebted to Brian by at least one autograph.

I am becoming a fan of Reynolds. However, I am not a fan of his annual race to 200 strikeouts. But I do like that he is all effort, all the time. His cyclone, one armed haymaker of a swing and "look out" third row errant throws are just side effects of his maximum effort affliction. And I'm OK with that. You wouldn't think a .250 lifetime hitter who averages 200 strikeouts a year would also have a .330 on-base percentage. Makes you think a bit doesn't it? 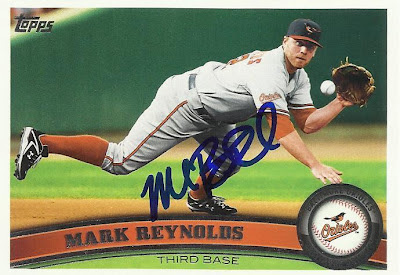 I love this card. It depicts what I was writing about earlier. Unfortunately this ball probably hit off the heel of his glove, trickled into left field and the speedy batter reached second base. Playing third is a bitch.