A Shot of Jack

The headliner of the VIP Autograph guests just so happened to be the first.  Jack Morris was a huge draw for autgraphs and he was free.  Twice.

Jack signed during the VIP reception before the gates opened up. 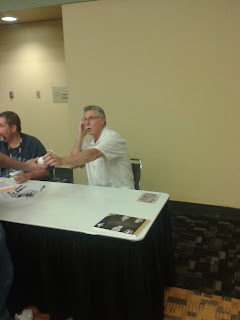 He was not very personable but was not mean.  Yet.

Once the gates opened up for VIP and all guests, Jack was up yet again.  This time in the center of the convention.  He had a pretty decent line, but I was able to go through twice to get cards signed.  I debated a third attempt but thought better of it.

I started my quest to cross some names off my list.  The first table I stopped at had a ton of in person autographs from private signings and shows throughout the Midwest.  The proprietors and I talked about their graphs and their favorites.  They talked about being friends with Jack Morris and I dismissed it as idle chit-chat.

Booming over the loud speaker was a notice to go get your free Jack Morris autograph.  No less than two minutes later, Morris walks past.  His friends call out and he comes over.  Shame on me for doubting these perfect strangers.  We were all perplexed and Jack explained the situation.

"I will never work for these fuckers again.  Not without my own guy doing the counting".  He agreed to sign only so many autographs and believes his numbers were being misrepresented.  So he walked away.  With a line of people waiting.  For their free autograph.  I don't know if I am on Jack's side or not.  He was kinda an ass, but deservedly so.

No matter.  I was able to hang out and talk with a potential Hall of Fame pitcher for 15 minutes.  And no, I did not ask him to sign because he was "done with that shit".    I did suggest a few places for dinner and to get the beer he so desperately craved.  Thanks for the story Jack.

Why no scans of the autographs you ask?

I was consigned on this occasion and will be shipping a few cards out to Jack Morris fans.  I needed to try and recoup some of the costs to attend this year.