Here Topps goes being all confusing again. First it was Charlie "Charley" Maxwell. Then it was Willy "Willie" Miranda. And now Charley "Charlie" Lau. It seems as if the 1950's and 1960's were not the age of quality control. It makes for confusing and scary autograph searches, but again this meets all examples and comes from a reputable source, Rich Altman and Hollywood Collectibles.
Charlie Lau 1966 Topps #368 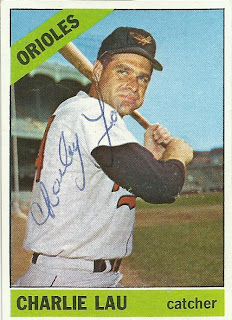 Lau was drafted by the Detroit Tigers in 1952 but did not make his debut until 1956.  A little thing like WWI got in the way as Lau was serving his country.  Lau had two tours of duty with the Orioles but suffered greatly from inconsistency.  He followed up every good hitting season with a poor one.

His work behind the plate deteriorated as his career progressed, due in some part to improper injury care.  Lau asserted that steroid injections to an injured arm allowed him to play before the injury truly healed.  This limited his ability to throw effectively and catch would be base stealers.

Lau's second career as a hitting instructor garnered him more attention than his playing career.  He started with the Orioles and eventually worked his way to the Kansas City Royals where his "absolutes" of hitting caught fire.  He is credited with helping George Brett and Hal McRae develop their batting stances and lay the foundation for their careers.  He authored the book "The Art of Hitting .300" in 1980, using George Brett as cover boy.  Lau passed away in 1984 after a battle with cancer.
at 9:41 PM