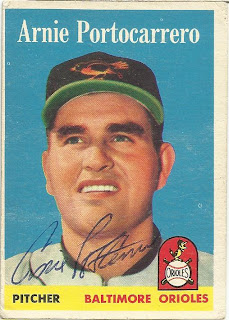 Drafted in 1949 by the Philadelphia Athletics, Arnie toiled in the minor leagues for a few seasons, toiled in the military during WWII and debuted in 1954.  The Athletics organization was not kind to Arnie and he never posted a winning season.  He was traded to the Orioles in 1958 and he took off, for a season.  He posted a career high 15 wins during the season.  He came back down to earth during his final two seasons in Baltimore, his last in the majors.  Arnie passed away in 1986 making a Crown card impossible.

This particular card was snagged from Hollywood Collectibles in my most expensive purchase of the National.  All in all, 32 names crossed off the list and one upgrade.  Also, 23 of those are deceased.  Not a bad haul for four days work.
at 10:01 AM