I spent all day at the National Convention in Baltimore and it was a draining day. I unlike most others saw all I needed during my seven hours on the floor today and have no need to venture back.

I had purchased two autograph tickets for the event and my intentions were to get those two signatures and then go the the Orioles game. Things didn't go exactly like that.

My day started around 11 as I met a friend and his father, looking for Eddie Murray Auto's and team set cards, near the front of the exhibits. We talked a bit but I couldn't stay long, I didn't want to be late for my 12:00 appointment with Steve Stone.

Early on the autograph pavilion was great. Lines moved quickly and most of the "All-Access" ticket holders must have slept in. Once stone started signing he blew through the line and even though I was #105, I was done in less than 30 minutes. 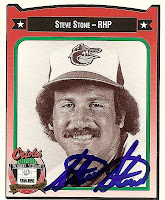 Stone was very business-like, pouring through his line with great precision. He had one of the longer lines of the morning, mainly because he rarely signs. His appearances are so rare show promoters made sure to plaster the rarity of this signing all over the site. Hall of Famers Rollie Fingers and Jim Kelly were signing at the same time, with noticeably fewer patrons. When I walked away from Stone, Kelly only had 15 people in line, ouch.

After my appointment, I had almost three hours to kill before my next meeting. What to do? I couldn't grab something to eat, I refused to pay $9.00 for an hour old fast food burger, so I browsed. I had no intention of buying anything because I didn't think I could find anything to fit my needs. I have very specific tastes, but did find one vendor with in-person autographs. 10,000 of them.

That's how I killed time, checking all 10,000 cards for anyone I needed. I brought no list so I went from memory and was able to cross another 16 players from my list. The autos were cheap and I was happy. The vendor even threw in the second half of the Crown set for free. Score.

My happy feeling was short lived.

Benny Ayala was the 3:00 and final signer of the day and he took forever. It wasn't all his fault, every "All-Access" ticket holder was now awake and in front of me in line. It took 90 minutes to get my card signed, but all-in-all was worth it. 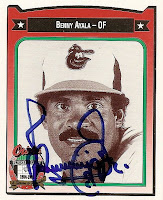 After that I had had enough baseball for the day, I had to skip the game and relax on the couch. Then blog of course.