Shaking Off A Little Rust

It's been quite a while since I was at a baseball game just to get autographs. Actually, it was never for me, usually there to help my brother in his endeavors. So needless to say it's been a while.

Quite fittingly my first chance came as I was walking down Eutaw street. The smell of BBQ and a boisterous laugh were filling the air as I walked between the warehouse and flag court. Boog was right there surveying his BBQ kingdom, posing for photo opps and signing the occasional card. I deftly swung my backpack around, grabbed my case and pulled his card and a Sharpie out simultaneously. Very smooth.

I think it was gravity propelled sweat, but can't be sure if it was mine or Boog's. The card does smell a lot like BBQ though.

I made my way to the seating bowl to find the Halo's taking BP and made my way to the third base line. The Angels are unkind to us local folks as they omit names and numbers from their warm-ups. The only opportunity I had was when a kid called over Scott Kazmir, who mysteriously was not on the roster I printed Tuesday night. Doh.

Empty handed, I made my way to the home side to wait for my players to make their way back out. Cesar Izturis and Nick Markakis signed at the corner of the dugout, for kids only, then took the field to stretch. The other starters came out and ignored us fans along the first base wall. That is until rookie Josh Bell made his way back to us. He signed for everyone making his way back to the bench. 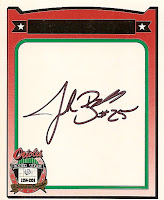 I don't have any major issue cards of his yet but the blank came out extremely well. If you noticed, I switched to black sharpie. It worked.

Luke Scott was next to come down the line and hit up everyone just like Josh. I have no photo of the 2010 Topps card I had him sign as I gave it away. The kid sitting next to me the entire game mentioned he saw Luke before the game and wanted to have him sign a hat, but didn't have a pen. "Here you go kid. Be careful though, it's kinda like crack. You may never stop" I said. OK, I didn't say anything about illicit drugs but it was inferred as I handed him his first autograph.

The Birds put up a bunch of runs, nine to be exact, but had to make it close. They won a tighter than necessary game 9-7, complete with rain delay and foul ball off my hand. Can't believe I mishandled that ball.

Don't go anywhere, I will be writing about post game antics.
at 3:00 PM