During my trading spree, I made a few larger trades to go along with the small ones I previously mentioned. I added a total of 11 cards from Todd last week, but only filling nine spots in my collection. To save the long read, I will break the trade down into more palatable portions.

Cabrera has had a rough go of things since he became a full time big leaguer in 2006 with the Indians. His ERA in Baltimore was 7.28 over a season and a half, but has gotten worse since moving to Boston. He has eclipsed the 10.00 ERA mark and has spent the majority of his time with Pawtucket. As an active player he signs pretty well TTM, but hasn't had a lot of requests. He is a bit of a wild card since he has yo-yo'ed between AAA and the majors. His unpredictability led me to make the trade and save some postage. 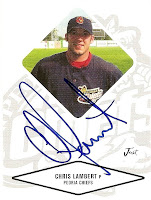 Lambert was a first round draft choice of the St. Louis Cardinals that came here via the Detroit Tigers. He finished the 2009 campaign with the Orioles, appearing in four games out of the pen. He clocked just over five innings after his selection off waivers on August 20th. It seems he dropped off the planet after last season. I can't find any stats for him during 2010 and even though he is listed as a Norfolk Tide, he's not on their roster or site. Anyone know where he went?

The culmination of his career came as an Oriole and Twin during the 1996 season. He spent seven years in the minors fighting to make the bigs, debuting on May 14th. His major league career lasted a total of 39 games and that's how he ended his professional career. Milchin is a very good signer TTM but his cards are slightly more difficult to come by, only having three major issues in the early 90's.