This is probably not what you are thinking. Roric Harrison is not the Vice President of the "free world." He is, however, VP for Altair Global Relocation. His home address wasn't working any longer so I had to dig a little. He has an unusual name and it was easy to track him down online.

It took exactly a month to get this one back. I felt a little bad pestering the guy at work and all, but had no other choice really. Other people put me at ease saying it comes with the territory, so I feel less sleazy. 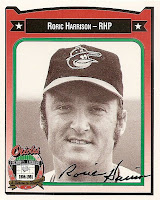 Harrison made his debut in 1972 with the Birds and posted the best overall numbers of his career. He had a 2.30 ERA in 39 games, splitting his time between the rotation and the pen. 72 was his only season in town as he was shipped to Atlanta in the off-season. In 1978 he called it quits from professional baseball and apparently started in on his second career, in the relocation business. I will be relocating a signed 1973 Topps card to my trade list if anyone needs.
at 9:30 PM