I didn't trade with the Hall of Famer, just an apparent fan of his work. I picked up Pat Clements and Kris Benson autographs I needed. Unfortunately, Clements has nothing picturing him as and Oriole and Benson must have stopped signing cards when he came to Baltimore. I have had a difficult time finding an Oriole Benson so, as a Met it is. For now.

I gave up my extra Milt Pappas vintage autograph and Chase Wright Yankees autograph. It's about time I got that Yankee outta my house.

Benson was traded to Baltimore before the 1996 season for Jorge Julio and John Maine. There was a lot of hype and a little controversy when he showed up. The hype, a good pitcher on the verge of "greatness", destined to turn a waning franchise around. 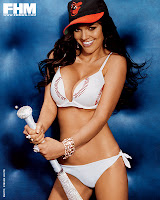 How can you expect the man to focus on baseball? He has been though. After tearing his rotator cuff as an O, he fought to make it back to the bigs. He did so with the Rangers in 2009 and is in the Diamondbacks organization this season. Benson is currently with the AAA Reno Aces, looking for another shot.

Clements' 23 games in Baltimore during 1992 were his last in the majors before retiring in 1993. His signing habits were great in the past but has not had a recorded success since last year. He has a ton of autos available on SCN, so I went out and got one. So, I should be getting my TTM request from him any day now.
at 9:50 PM