Another slim week of returns, but it is somewhat expected that the more I progress, TTM successes may be less frequent. My second success this week came in just under two months from Texas Ranger manager Ron Washington.

Washington had a 10 year major league career, the majority of which came as a Minnesota Twin. He was released by Minnesota before the 1987 season and signed with the Birds. He played 70 games in Rochester and 26 games in Baltimore. He was used in every way possible, seeing time at shortstop, second, third, DH, left field and right field. Traditionally he was an infielder but his athleticism allowed him to fill in in the outfield. Unfortunately Ron never put it all together at the plate when he was in town, hitting only .203. After the 87 season he signed with Cleveland before finishing his playing career with the Houston Astros.

After his playing career ended, Washington became a coach, first as a base coach, then infield coach and now as manager of the Texas Rangers. Ron currently has his team in first place and has made major moves before the trade deadline. I just hope they are good enough to beat the Yankees in the post season, that's all I have left to look forward to this season. 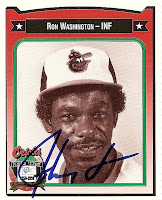