After Buck Showalter's second straight victory yesterday, I made my way outside to try and get some players as they were leaving. My hopes were not high but because pre-game was so disappointing I had to try.

Some kid came walking out with a carryout container in his hand, wearing ear buds and I didn't pay any attention. That is until a woman who knew her way around called over to him and he started to sign for her. That's when I got this: 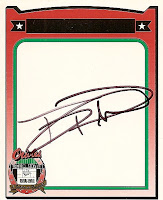 Patton is poised to make his Orioles debut this weekend and after talking with him, is chomping at the bit to take the mound. He was a really nice guy but looked like his was 17, at best. I misfired on a 50/50 earlier this year as Patton was promoted away from my connection. I am just waiting to pull the trigger on this one and add him to the master list. Then cross him off.

A bunch of cars and stars drove past without stopping. Then our stopper came to a halt, rolled down the window and signed for the night owls. 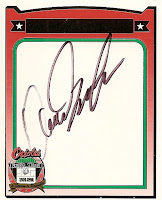 I congratulated him on another save and he was extremely gracious. He signed multiples for everyone who had an backed up traffic a bit. Enough to garner a honk form a car behind him. He pulled away, only to stop further up and sign until everyone was spent. The blank was all I had with me as I sent for him 50/50. Blog posts from my connection say it was a success but who knows how they turned out?

I started to notice a trend with Simon's signature, my pen starts dry. I switched out the pen when 1983 World Series MVP walked up behind me and reluctantly stopped to sign. 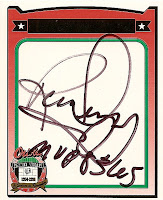 Rick looked exhausted. Only a few of us had stuff for him to sign so he got off easy, only signing three. I didn't ask for the inscription, but did make reference to his World Series ring. That thing is awesome.

Matt Wieters pulled out and my veteran woman said not to try, he never stops. Tonight he did. At the end of the block. For some kids. I trudged down to him, the only adult to make the run. After all kids were taken care of, he looked at me and said, "Sorry kids, I have to go." Ouch. Whatever, it is about the kids. I wasn't mad, just a little winded.

Mike Gonzalez stopped for us and with no car behind him signed for almost five minutes. Again a nice guy in a sweet ride.

He may be nice but was a little clumsy with his thumb, completely smearing his first name. I tried to make a deal for a postcard a fellow grapher had signed but he quickly changed the subject. No dice. I let it go. Hopefully some 2010 base cards I bought will be here before I head to the park again on Friday.

I saved the weirdest for last. Jake Fox went tearing past our first group only to stop in the same place as Wieters. I made the same run and felt like he would deny me the same way, but grabbed my card and sharpie. Then glared and me and barked, "What are you using this for?" I puffed up and got defensive. "My collection", I responded. He sneered and signed the card, in Greek. 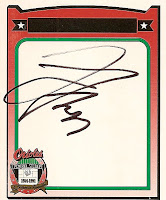 The Jake Fox market is a little slow right now so I guess I will hold on to this card instead of selling it to pay my mortgage (I really wish there was a sarcastic font I could use). Maybe he would have preferred his 2010 Upper Deck Biography card that just came to me today? I shall find out on Friday, or Monday.

All told, not a bad day. Eight Orioles and one Redskin in eight hours. Feels good to be back.
at 11:00 PM