Last week was all about Fanfest and the tons of autos I brought in This week will also have a theme, trades of course.

Before FanFest I decided to revamp my "Master List". It now has notes, addresses, and who in the autograph world has a card I need. It is now a one stop shop of what I have, what I need and where to get my needs. I am pretty proud.

It has paid off as you will see going forward.

When preparing for FanFest, I had a lot of autograph vouchers for players I already had. Instead of just getting doubles, which I did for most, I traded slots away. I traded the rights to my Chris Tillman 2010 Topps Allen & Ginter for a former catcher. 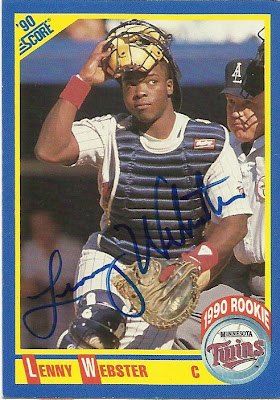 Lenny Webster never tore the cover off the ball, but it didn't matter. My mom loved him anyway. She thought he was the cutest thing. On a team with Hall of Fame players, Ripken, Alomar and "Palmeiro", Webster was King. She could not have picked either of those three stars from a lineup. Unfortunately Webster doesn't do much signing, and didn't do much when playing. I have yet to track down a working address or Orioles card. Any sleuths out there have a beat on Webster?