After I finished my 11:20am autograph session at 11:25am, I had more than two hours to kill before my next paid session. I evacuated the autograph area and met up with Mark to exchange some helping autograph items. I was getting an Adam Jones Magazine and he was snagging a Matt Antonelli card for me.

I didn't need any free bobbleheads of Brian Matusz, foam fingers or tee shirts on the third level. I went back to the main floor to try my luck with hounding a few players entering and exiting the main stage.

Many of the players declined as expected, but four relented. 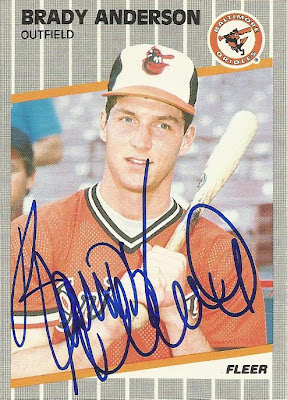 Anderson was mobbed as he left the green room and actually stopped. There were a dozen people when he grabbed the first pen, signed at least 30, and declined another dozen. Side note: Brady looks no older today as on this cards from 20+ years ago. No wonder the ladies still swoon over him. 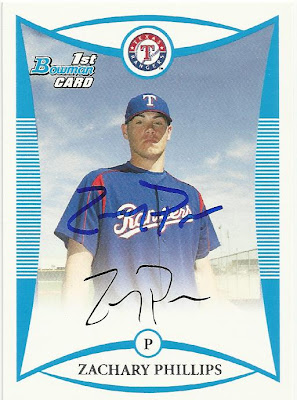 Phillips' handler did a good job of deflecting would be autograph seekers but my persistence paid off, halfway across convention center. A well placed, "Please? Just one more?" worked.

Zach made his debut at the end of last season and was lights out. Hopefully he can maintain for an entire season. That would be a special 2012 campaign. 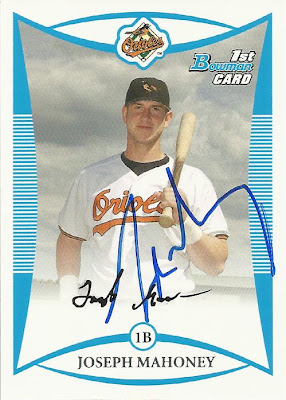 Mahoney declined a few autograph seekers as he was walking to the green room. Apparently it was too crowded for the 6'7" first baseman of the future. As he waited his turn to be barraged with interviewers I politely asked for a signature. He willingly took my card and signed. I don't think anyone noticed as he wasn't berated with requests. This will probably be the year Joe cracks the major league roster and I will be waiting to add his name, then cross it right off. Either this card, or an identical twin are up for grabs. 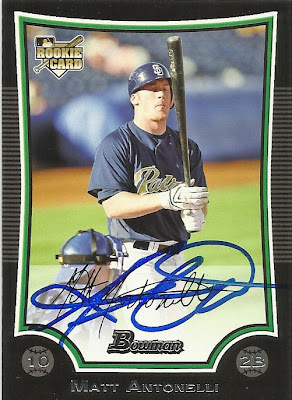 Antonelli was a difficult guy to pick out. First, cause I've never seen him before. Second, he's a quick little guy. He was darting in and out of people. Bobbing and weaving. I'm not as nimble as he, but I took the right angle of pursuit. This card is actually available for trade. You will see why later on.
at 3:27 PM