Work Has Finally Paid Off

OK, work has paid my bills for years. So what? That is what a job is for. It is supposed to do that. Friday, my job finally gave me something worthwhile.

That's right, on my day off I stopped by another branch and I was bearing gifts, an Elrod Hendricks signature, Koji Uehara autograph and Albert Pujols jersey card to be exact. I left with 20 Lineage base cards I needed and another name to cross off the all-time list.

Nick and I talk baseball cards whenever we are at meetings or trainings together and get a lot of weird looks. We are used to it because it comes with the territory. We found we both loved the Lineage release this year and after I decided to put the set together, he crossed a ton of cards off my list. He liked some autos, so for a fan and a friend, it was a no brainer.

Nick is a collector without a direction right now. He loves the Orioles as do I, but he collects anything that catches his eye. Hoping to get him here in the blogosphere soon so he has an outlet for his baseball card obsession. 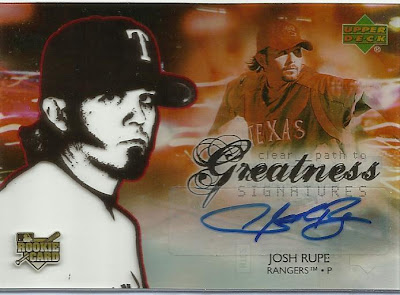 This card is very nice. It pays homage to the Classic Acetate sets from the early 90's with a see-through portion of the card. And those side burns, awesome. If you blinked last year you probably missed Josh and his stint with the Orioles. He lasted a total of nine games during the 2011 campaign. He is currently looking for a gig.

I appreciate the trade Nick. Unfortunately it is back to work as usual on Monday.
at 1:02 PM