At 2pm I was prepared for my next paid signing, beginning four hours of standing in lines. 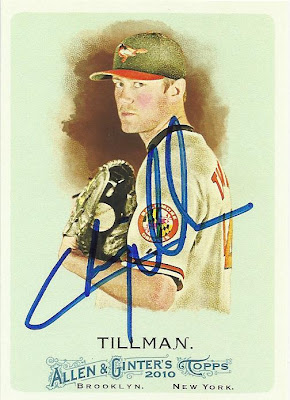 Chris continued the trend of disobeying orders and signed two cards for me. The second I have looks exactly like it, just bigger. The base version is making its way across the country as part of a trade I made before leaving for FanFest. I just love the mini aspect of this card and am throwing it in the collection. I do have a personalized 2009 Topps Update for any other collectors named Kirk.

I misplaced Rapada's 2007 Topps 52 rookie so I went up to him empty handed. I asked for blue sharpie as always and he obliged as they all did. His RC was as a Cub so it would never have supplanted his postcard in the collection. I am figuring this will be in the collection forever. How often do specialized middle relievers make their way into sets? Pretty much never. 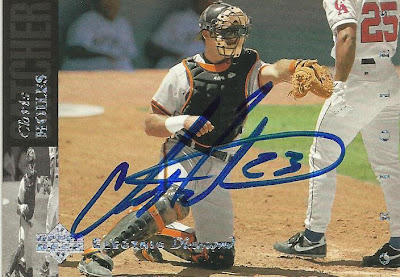 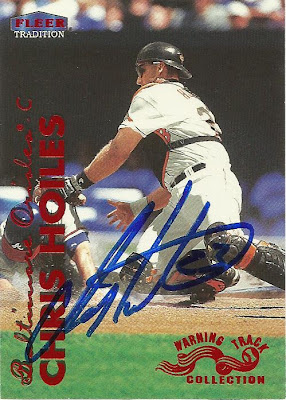 My second showing with Hoiles accounted for two more signatures, although reluctantly. Apparently he had been getting the business from his handler about keeping lines moving and told me I was gonna get him in trouble. I told him I had his back. He chuckled and signed away. Both are up for trade if anyone is in need.

Matt Wieters was next and I had something special for him. Actually, Chuck did. I was just the vessel to get it signed. It was a sweet 11x14 of Wieters to be signed in gold paint pen.

Not an exciting line, except for the fact that my brother and nephews showed up. The weather delayed them from Frederick and as true Nationals fans, the boys seemed disinterested. But for me it was a second wind as I was able to think about anything but standing in line some more.
at 3:35 PM