Can you guess what I was doing a year ago today?

If you said something about baseball cards and autographs that would be correct. But I was looking for something a little more specific. My memory isn't the best, I needed a little help figuring this one out.

I was sending former Orioles pitcher Mike Johnson a card to have signed. Today, that card came back signed. A full year, 365 days was all it took. It's kind of odd, in a cool way. Being that it is Friday the 13th, It was slightly creepy. 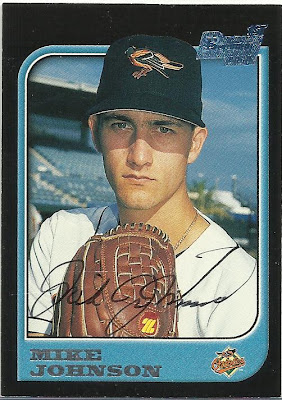 For those of you keeping score at home, Yes. Yes that is the same Mike Johnson I just traded for last week. At least this card upgrades from a 1992 Triple Play Camden Yards blank card.

The auto is signed in pen, which I hate, but looks better than most pen signatures I have. Mike is a coach for the Canadian National Team and I was contemplating an International request before this came back from California. Mike hasn't been in high demand on the TTM circuit, mine being only the 3rd reported request, 2 total successes. His short career only allowed for 4 cards to be produced featuring hm as an Oriole in 1997. One more upgrade to cross off the list.
at 10:15 PM