I double dipped at 3:20, trying to cross some more names off the list. Kyle Hudson being designated for assignment last week made that prospect less appealing. I went through with it to upgrade my collection further down the line. Hopefully that comes through because the only thing I got from this line was dupes and sore feet. 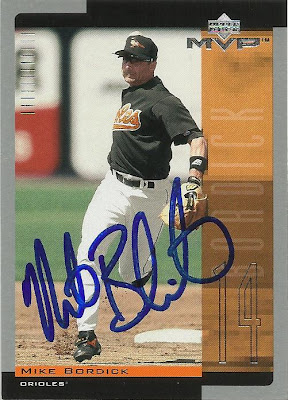 This one was gone before it arrived. The last of two for Amy. She is going to help out with some Atlantic league players this year. Fair trade if I can knock some names off my list. 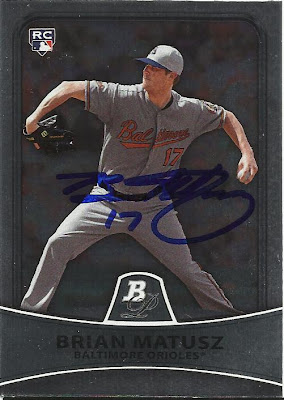 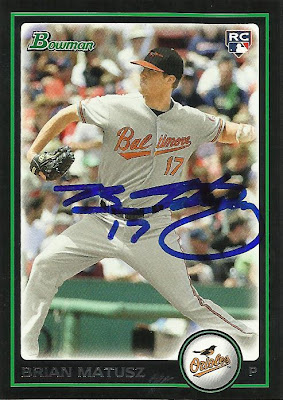 I had heard that Matusz was difficult. He had denied me multiple times at games so I was expecting him to be one per. He was not. He was extremely personable and nice and was talking with every fan. Maybe last year was a little humbling for him. I have a feeling he is going to have a big year. 15 wins. You read it here first. 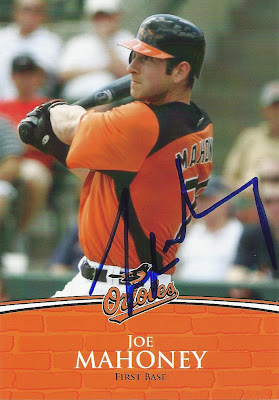 I used my only card on Joe earlier in the day so I added a postcard to my collection. If anyone is looking for one, yet another postcard available for trade.

Adam Jones is another slot I was able to trade. I was able to have his 2008 Orioles program with Nick Markakis and Luke Scott completed. Jones said it was the first he had seen completed because Nick was the tough one. He went on about how hard Nick was to get, but how Scott would just sign anything. Jones may have exaggerated his own signing habits a bit. But I have to admit, it is a pretty awesome piece. I will let Chuck be the first to show it off.
at 3:13 PM