My continuing autograph saga from Orioles vs. Pirates on June 13th.

Inside the stadium I was able to bring Robert Andino over to the camera well for a quick signing session.  He signed two for me no problem and made small talk with everyone around.  Andino continues to sign well even with a dip in his performance only adding to his popularity with the fans. 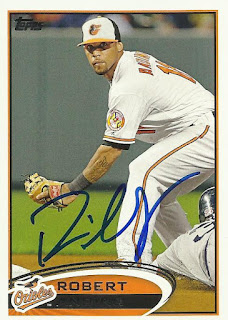 I am a big fan of the new logo so this card will supplant a 2009 Topps Update card that I got last season.  Anyone need it?

After batting practice was finished Nick Johnson was the only other Oriole to stop.  He signed the two Nationals cards I had for him and was able to cross his name of my list.  Unfortunately after graphing him I came across an Orioles Postcard that I now need signed.  Hopefully I can upgrade next time. 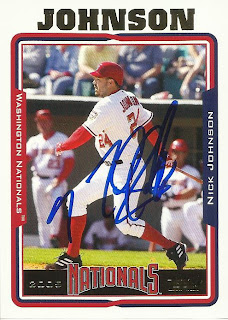 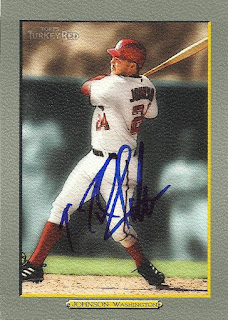 The Turkey Red card is available at right now and the Topps will make its way to the trade list as soon as the Postcard gets signed.

I had time to kill before the final appearance of the Orioles before the game so I decided to try my luck with the Pirates.  I was next in line for Pedro Alvarez before he ducked into the dugout.  Persistence did pay off when the next Pirate came over and I added this beauty: 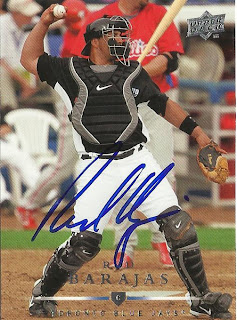 It was here that I ran into a mother and her young son, both Pirates fans trying to get autographs.  They were lucky enough to get a Barajas signature on a ball as well.  I decided to try and share the wealth and gave him my extra Andino autograph and he chose a duplicate Kevin Correia for his collection.

First Base Coach Luis Silverio saw the young Pirates fans along the rail and started hit a few balls their way.  He accuracy was perfect and I was able to help grab one for the kid next to me.  Not a bad day for an eight year old, autographed ball, two autographed cards and a practice MLB baseball.  I was only slightly jealous.

I made another attempt at Wilson Betemit and was denied three times  My consolation prize?  Another Nick Johnson. 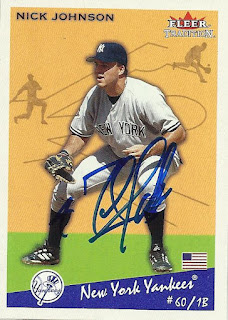 Who wants to get this Yankee outta my house?