The final installment of my marathon effort graphing the Orioles and Pirates on June 13th.

Following the 7-1 thrashing by the Orioles I was exhausted.  I had been at work at 6am to finish up some reporting and had to be back at six on Thursday.  There was absolutely no reason for me to stay and graph post game.  None.  Zero.

Inexplicably, I did stay and was rewarded handsomely.

An attractive woman got the attention of Ryan Flaherty for a picture and I was able to convince him to sign for me. 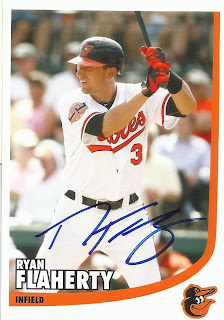 The 2011 Topps Heritage Minor League Issue card he signed for me at Fanfest this year is now looking for a good home.

I was ready to give up because no cars were stopping when I noticed the gaggle of graphers by Home Plate Plaza had disappeared.  They couldn't have all gone home, they had to be on the hunt.  That they were. 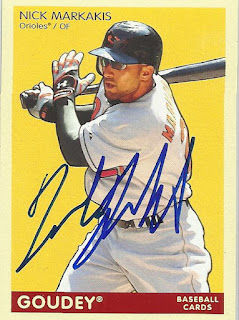 Markakis had stopped to sign for a friend and his children and the blood was in the water.  He didn't drive off as the throng came over.  He was cordial and signed for everyone, even as his friend was urging him to go.  Thanks Nick.

Markakis made my day.  Time to go home.  Get some sleep before a long day of work.  Or not.  I couldn't leave.  Who would I miss? 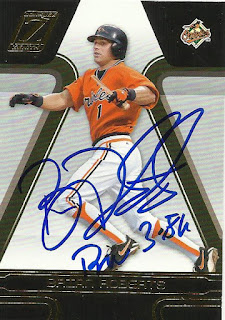 Thank goodness for little kids.  They started to leave as Roberts' truck came out of the lot.  He saw them, stopped, and signed for the adults as well.  Helluva night.

I like the inscription on this one and will be keeping this in the collection.  I have a 2005 Fleer Tradition (orange uni) Roberts and a 2008 Finest Moments Autograph of Markakis now on the block.

All-in-all, a great day.  Albeit a long one.  I scratched another name off the list, upgraded four other graphs and got some postcards for future upgrades.  Thanks for sticking with me and let me know if you have any interest in the autographs I have available.