Down on the Farm Friday: Tim Bascom

**My first attempt at a recurring blog feature.  Be gentle.**

With every call up and roster move the Orioles make, I find myself pushed further and further away from my ultimate goal. Typically I have to then scramble, pick up cards of the new Bird and try TTM or IP attempts. Recently I have made scooped up a few cards of the players waiting in the wings. 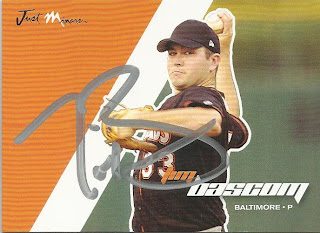 Tim bounced between Bowie and Norfolk last season stalling slightly in AAA.  This season he has anchored the BaySox team, leading in innings pitched, strikeouts and is tied for the team lead in wins.  Hopefully he can maintain throughout the year earning a call up.

Predicting when a relief pitcher may be called up to the big leagues is a total crap shoot.  I am not predicting he is the next to move, but I do hope he makes it eventually.

If anyone has minor league issue, unlicensed cards or prospects of anyone in the Oriole system, I am looking to deal.  Just let me know.﻿
at 12:00 PM