as documented many ties before, Wifey is not a sports fan.  She is a runner, but doesn't like competitive sports.  She isn't a huge fan of baseball cards or my obsession with autographs but she does support my happiness.  Until my season tickets this year, the only sports related item she ever gave me was an 8x10 of Rick Dempsey.  Three years ago for Christmas.

She had hopes of getting it signed first, but was unable to do so.  So I have carried that photo on every graphing excursion I took.  All to no avail.  That was until last Wednesday.

I caught up with Rick on the third base line before the game.  Only two of us were prepared with items for him and now I have to find a place to hang my newest addition. 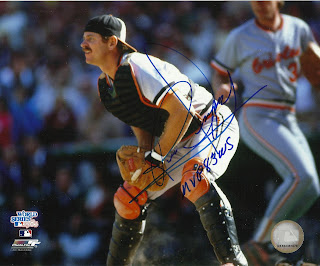 I love the World Series inscription he adds.  I think it is his way to make sure that he is never forgotten for that.  I don't think many baseball fans outside of Baltimore have any clue he won the award in 1983.  Now, anyone entering my man cave will be informed.
at 12:00 PM