Down On The Farm: Connor Narron

**My first attempt at a recurring blog feature. Be gentle.**

With every call up and roster move the Orioles make, I find myself pushed further and further away from my ultimate goal. Typically I have to then scramble, pick up cards of the new Bird and try TTM or IP attempts. Recently I have made scooped up a few cards of the players waiting in the wings. 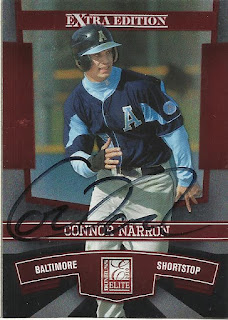 Connor is the son of former catcher and current Milwaukee Brewers Bench Coach Jerry Narron.  He was a fifth round selection by the Orioles in 2010 starting with Gulf Coast and then Aberdeen.  2011 was exclusively as an Aberdeen IronBird.  Despite limited successes in his first two seasons, Connor was promoted to DelMarva to start the 2012 campaign.

This season he has made improvements his average still hovers around the Mendoza Line but his power has increased exponentially.  Earlier this year he registered his first homer as a professional.  He currently plays shortstop but his range is suspect due to his lack of speed.  Scouts believe that his career may be better suited behind the plate like his old man but that remains to be seen.  Connor was a very quick responder, only 10 days needed to respond to my request.  Hopefully some of his teammates will follow suit.﻿
at 12:00 PM