Two More in the Book

It seems as if I am spending more and more time with the collection and gearing up for FanFest, spring training and the 2010 season. Trading has also picked up as I am expecting a few new autographs to come through this week. My short term goal is to eclipse the 50% mark by the end of the baseball season. Slowly but surely my needs list is being whittled away. I received two more successes in the mail tonight, hopefully continuing a good year. 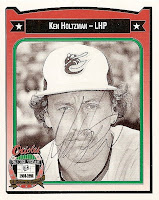 Ken Holtzman had a one year stint with the Orioles in the latter stages of his 15 year career. Many Oriole fans from the '70's remember him beating our team in the 1973 & 1974 ALCS as a member of the Oakland Athletics. He came over in the Reggie Jackson trade in 1976, only to be moved again in the middle of the season to the Yankees. His short lived career in Baltimore spanned 13 games only yielding five wins but an impressive 2.86 ERA. 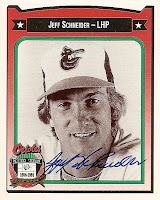 Schneider's entire major league playing career was crammed into the Orioles 1981 season. As a reliever he appeared in 11 games recording only one save. Although his career was easily forgettable, his 1982 Topps card featuring some guy named Ripken is slightly more recognizable.

Knowing that Schneider and Bonner are decent signers TTM and Ripken can be had at a price, I will pursue this tri-autograph card.
at 7:31 PM