My brother gave me a children's book for Christmas, not just because it is in line with my reading ability but because it is Orioles related. The book titled "The Longest Season" chronicles the Orioles of 1988, who hold the dubious distinction of starting a season 0 and 21.

It's a good read and teaches children the lesson of perseverance and I am sure to pass it along to my future children. The book inspired me to take a closer look at the team and what they went through that season. I am chronicling the 1988 team in autographs I have collected. I tried to stay true to the 1988 season, using a card from that year, but it was not always possible.

The season started with little fanfare due to the lackluster finish to the 1987 season. Cal Ripken Sr. started the season as manager with sons Billy and Cal Jr. starting up the middle. The first game was at home versus the Milwaukee Brewers and set the tone for the next 20 games with the Orioles losing 12-0.

Orioles Staring Lineup on April 4, 1988 vs the Milwaukee Brewers: 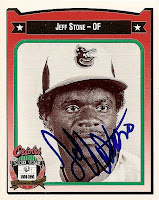 Hitting clean-up and playing first base, #33, Eddie Murray. 0 for 4

Doing the catching and batting eighth, #15, Terry Kennedy. 1 for 3

Searching for a change, upper management let Cal Ripken Sr. go on April 12, replacing him with Hall of Famer Frank Robinson. Frank fared even worse, prompting speculation to why he was kept around longer, but he finished out "The Streak" and the season as manager.

Starters During "The Streak" 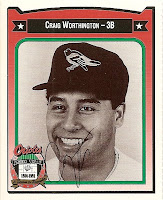 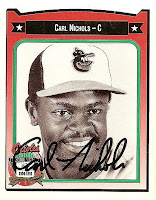 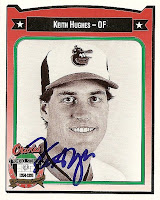 Mercifully the losing streak was ended on April 29th as the Orioles shut-out the Chicage White Sox 9-0. Murray and Ripken Jr. both went yard for the Birds to put an end to the second worst losing streak in baseball history. Winning did not catch on as they went and dropped their next game to finish April 1-22.

Other Players Appearing in a Game During the 1988 Season 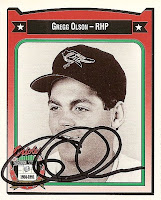 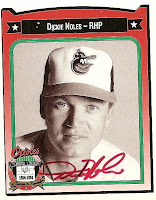 The 1988 season finished much like it started with the Orioles losing four straight and eight of nine. For the season they totaled 54 wins and 107 losses without having a single winning month. 1988 marked the second time the Orioles eclipsed 100 losses, the first since their first year in Baltimore ('54), and most losses in team history.

Thanks for the memories guys.
at 4:58 PM