Sorry guys, this post is not devoted to Bobby Brown, Michael Bivens, Ricky Bell, Ralph Tresvant and Ronnie DeVoe, of early 80's R&B fame, but to my latest autograph editions. I apologize for getting your hopes up.

Until this week I had been suffering through a substantial drought of TTM successes, none in 2010. That was until Mr. Postman brought me two "New Editions" this weekend. You just have to love the 70's. This is perhaps the sweetest example of facial hair/chops/sideburns I have seen featured on a baseball card. If you have any documentation of better I would be very impressed. I am really enamored by this card and how well it represents a specific era in our culture.

Aside from awesome facial landscaping, Bailor played a little ball as well. He had an 11 year major league career with four different clubs, starting his career in Baltimore. He found ole B'more a tough infield to crack playing behind Brooks Robinson, Mark Belanger and Bobby Grich. He only played 14 games here before finding a starting role to our North in expansion Toronto. I'm sure many people will remember him for his playing and managing, but I for one will remember his chops. His mutton chops. 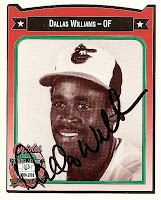 Dallas was the Orioles' first-round selection in 1976 and made his debut in 1981. He played in a mere two games for the Orioles, only batting in one, going 1 for 2. These two games were all Dallas saw as an Oriole before being traded to Cincinnati in 1983. His major league playing career was short-lived, never sniffing the bigs again after the '83 season. Continuing the trend of players turned manager, Dallas has spent his time since 1989 coaching and managing at the Major League and Minor League levels.

Both requests were sent out just after New Years and received around the 15th, a very quick turn-around. All told, I have sent about 30 requests this year, so hopefully the returns will start to roll in.