Maybe it's the cold weather. Maybe it's FanFest. Maybe it's the thought of Spring Training looming. Maybe it's just boredom. Whatever it is, I like it. I have received seven TTM successes and a trade in the last five days. This is more like it.

I sent a round of requests on January 14th and five of those have come back successfully already. So here are the last five days of successes. 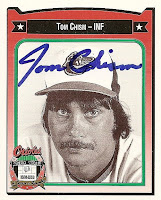 Chism is the only unique success I received this week, every other card is replacing one currently in the collection. The main reason for that, he never had a major card released. There are a few minor league issues from the late 70's but his Crown card is his only one as an Oriole. Tom's career spanned six games for the O's in 1979, garnering three at-bats but never recording a hit. 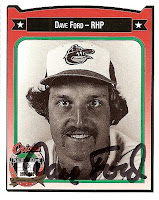 I never knew David Wooderson from Robert E. Lee High School went on to pitch for the Orioles. I thought he would have stayed around the grounds chasing approproately aged high school girls, but apparently not ("Dazed and Confused" reference for those that didn't get it). He seriously looks like Matthew McConaughey's character from the movie and the timing kinda fits. He made his major league debut in 1978, and the movie took place in 1976, coincidence, I think not. I hope he got royalties or something for his obvious influence over the role. This autograph bumps out a 1983 Fleer I traded for before breaking apart the Crown set. 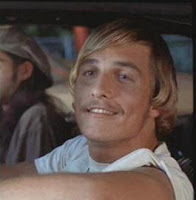 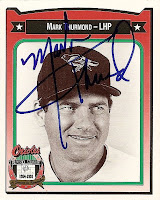 My second string of successes from Thurmond since starting "The Quest." He was actually the first I received, long before I broke apart the 1991 Crown set for autographs. The only cards I had besides the Crown was four 1989 Topps cards and now I have three available. Glad to get the Crown version into the collection.

So, have you ever received a signature with a bible verse and wonder what it said? I did, and this is what I found: "I am not ashamed of the gospel, because it is the power of God for the salvation of everyone who believes: first for the Jew, then for the Gentile" Romans 1:16. Apparently God is an Oriole fan, making references to Jim Gentile in the Bible. I joke because I don't get the relevance of the verse, I should probably open my mind our soul a bit more.

Of all four Topps cards I sent, this is the only one without the biblical verse inscribed and I like the balance of it better. I think he got tired of signing it every time. 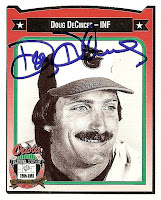 The DeCinces I received in the mail is another replacement. I had made a trade early on for a bunch of 1983 Fleer cards, and have begun replacing then with Crown cards. It's hard to follow a legend and that's exactly what DeCinces had to do after Brooks Robinson retired. DeCinces was no Brooksie, but no one was. He became a solid defensive third baseman with average offensive statistics. He posted his best year in Baltimore with 28HR, 80RBI and a .286AVG in 1978.

This card came in my lone trade this week in return for a 1994 Bowman Harold Baines. I have also sent a TTM request to Lowenstein this month, but there have been few recorded successes, so I pulled the trigger on a trade. I am sensing a theme with these successes this week, famous characters impersonating baseball players. In steps Father Guido Sarducci. As a kid in the early 80's I actually thought Lowenstein and Sarducci were the same person. 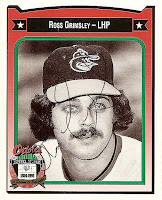 This card doesn't do his hair justice. His nickname was "Skuz", and there are a handful of cards showcasing his locks much better. I have only seen his signatures in pen, but was still hoping for sharpie. A boy can dream can't he? 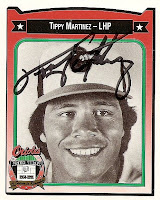 The third and final installment of Felix Anthony Martinez, first was '81 Topps, then '83 Fleer. It was my second go-round of TTM and the first with a sharpie. Upgrade.

I sent this request almost a year ago and am happy to have it back. The only sad part is that I have to send another request for the Crown card to add to that set. All of these repeats make me a little angry I didn't get the Crown set together before initially sending out my requests. It feels like I am crawling uphill, getting successes, but not the main ones I need. I have a pretty cool card, 1989 Donruss Baseball's Best, but since I can add a RC to the collection I will.