I have waited almost 20 years for this day to come. I even began to wonder if it was a possibility or a pipe dream. But today, this particular journey has ended.

I finally have a Mickey Tettleton autograph. There is a story here I promise.

Let me set the stage: July of 1989, two brothers, 11 and 9 went to a baseball game at Memorial Stadium with our family. We got there early in our little league hats and baseball mitts, ready for anything.

We made our way to the front railing separating the stands from the players and waited for our favorite players to come by. We weren't savvy autograph hounds so we were without cards to have signed but equipped with programs. A few ballplayers made their way past us and signed our books and talked a little ball.

Then, out came Tettleton, fresh off his first All-Star Game appearance. He was a big guy and easily recognized. We called out to him over and over again trying to get his attention. "How cool would it be to get an All-Star's autograph?" we wondered aloud.

Finally he made eye contact. This was it, get the pens ready, he was coming over. No, he just shook his head and started to walk away. We failed. He wasn't interested and was going away, forever. My older brother, always being more vocal, decided to give it one last ditch effort. He screamed, "You're just pissed you struck out in the All-Star Game." Somehow, this did not cause Mr. Tettleton to come over to us and apologize for omitting to sign our programs. He did respond however, by flipping us the single digit salute. I say us because I was standing right next to my brother, completely frozen by what he had said, hoping no adult heard him say "pissed".

We knew Fruit Loops cereal made him a better hitter, we didn't know it made him flick off children. The initial shock of being flipped off by an adult, let alone a professional baseball player, quickly turned to excitement. It was the coolest thing that had ever happened to us, we made an impact on him. He would never forget the two kids that called him out after the All-Star Game. Never.

Mickey is a relatively tough autograph and forced me to break one of my tenets of autograph collecting, I bought an IP or TTM autograph of a living player. This marked the first time I broke the rule, but probably not the last. I got antsy and just wanted to make another addition to the collection and succumbed to a moment of weakness.

So, 20 years later I got my autograph. 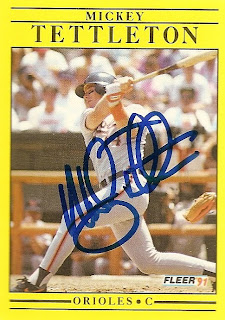 Today I also received another addition to the collection, manager style. 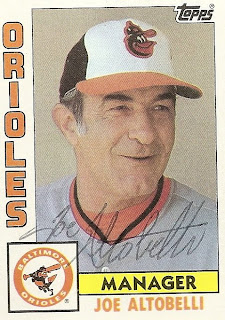 Altobelli was the connector between both tenures of Hall of Fame manager Earl Weaver. He only managed a little over two seasons but brought home our city's last championship in 1983. 1984 brought another winning season but not enough to keep his job safe when the team was three games above .500 in 1985. He never managed in the Majors again, but we still have 1983. Hopefully it is not all we have to hold on to for long.
at 4:57 PM