It's That Time of Year Again

Since it's January the sports landscape of my life looks eerily similar to years past. Redskins-done. Bullets-not good. Capitals-only watch playoff hockey. Orioles-rebuilding...promising?

This is a bleak time of year with the weather and sports scene. I will still watch the National Championship game tonight and playoffs this weekend but what does it matter. My family and I have been spending more time looking at the Redskins draft position than the product on the field. A shake-up and a stick-up in the Nation's Capital have kept sportswriters busy but as a fan I am tired.

In step the Baltimore Orioles. There are a ton of questions in the rotation, bullpen and some in the outfield but the team shows promise. First rounders will get the chance to shine alongside veteran players with a lot left in the tank and something to prove.

I don't feel like the Orioles will contend in the juggernaut division they play, but have a chance to claw back to respectability this season. In years past I hadn't been optimistic and the team made sure not to let me down, but I think this year can be different. Mediocre even.

I also like what they are doing to stay relevant in Baltimore this time of year. Instead of waiting until just before the season to have their annual Fan Fest, it falls a mere two weeks away on January, 23 2010. Baltimore may still have a football team alive in the playoffs but the O's are stepping in, at least for one Saturday, to say "Don't forget about us." Waiting until after Spring Training gives us regular fans the chance to distance ourselves from the team, making it harder to come back in April. It helps that the team opens on the road this year, but I like to think the date was changed to keep me interested.

Many of my friends and fellow collectors have made the annual pilgrimage to Fan Fest, but this year will be my first. I am hoping to pick up sigs from new roster additions this year and last, although I have heard the signings leave much to chance without a schedule.

The Orioles have even become irrelevant in my mailbox this winter. I haven't sent out many requests during the Christmas season and I have had no successes in 2010. I had this notion that every former ball player would sit around a fireplace with his family and read my letter aloud, have it touch his heart and sign any card I sent. It's weird that my collection is not the focal point of their holidays.

This day does however bring a new addition to my collection via The Bench. 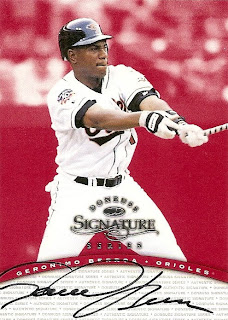 I had flirted with buying this card in the past but couldn't bring myself to do so, preferring to trade. Eventually the fact that there haven't been any TTM successes recorded for Berroa and a limited number of autograph issues as an Oriole broke me down. I had to break the bank on this puppy. $2.00. Delivered.

Packs were outrageously priced, costing more than five hours salary (I was 16). Any time I walked into a card store they called my name but for some reason Pinnacle Mint is what I spent my money on. Coins are a much better investment I must have thought. Eventually I got up the nerve and the scratch and bought a pack.

I knew the Cal Ripken/Alex Rodriguez Passing the Torch Autograph worth more than $1000 was in my pack. I just knew it. It had to be, it was destiny. I cautiously opened the pack careful not to damage my gem. Then I must have been distracted because the "white whale" was swapped with Marty Cordova, pre-sunburn. So now I won't buy high end product, thanks a lot Marty.

My collection also boasts another gem from this product.