Bob Kuzava pitched in 10 games for the Orioles, starting in their inaugurial season of 1954 and ending in 1955. When I started my autograph collection he was one of the first players I sent to, for a few reasons.

First off, I had a card of him. It's kinda difficult to get someone's card signed when you don't have one. Sewcondly, statistics of his signing habits had him an almost lock to sign, 94% to be exact. With a few lost envelopes, incorrect addresses, insufficient postage and even forgetful seekers, 94% IS a lock. And Mr. Kuzava did sign for me, two postcards he included, not my Orioles Crown card.

I was bummed, especially when I learned a fellow collector received his Crown card signed, that same week. The postcards themselves are pretty sweet, especially the Senators one, but as I was starting out I was quite particular about my graphs.

It's hard to tell that there are stamped logo's of each team on the postcards, but rest assured, they are there. Sorry my scanner is crappy.

Last week I started pulling apart some more sheets of Crown cards, yes they are perforrated sheets, and tried my luck again. No need for a third time, my second was the charm.
Bob Kuzava 1991 Orioles Crown #251 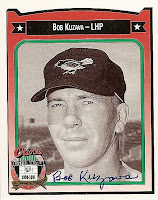 Before Baltimore, Bob was used to winning, a lot. He was a member of three consecutive Yankee World Championship teams directly preceeding his tenure in Baltimore. His two seasons in town were as a member of seventh place teams, a slight departure to what he was used to. He started nearly have of his appearances in the bigs, totalling 99 in his career. Kind of staggering is the fact that he completed 34 of those games. His last major league action was in 1957 with the St. Louis Cardinals, but he pitched another three minor league seasons before hanging up the spikes.
at 9:21 AM