All Over The Place

A strong mix of trades and requests kept me busy this week. Each day had me ripping open envelopes, searching for the next name to cross off my list. In only three days, I've added six new players, two prospects and one Orioles Crown card to my collection.

Amaral spent the first eight seasons of his career with the Seattle Mariners, only to sign in Baltimore before the 1999 season. He had always been a solid player who did pretty much everything on the diamond and he started out that way here. He played every base and outfield position in 1999, while hitting .277 and being a presence on the base paths. 2000 was not a stellar season and Amaral retired at seasons end. I gave up a Joaquin Arias 2007 Topps Moments & Milestone Autograph to add this bad boy to my collection. 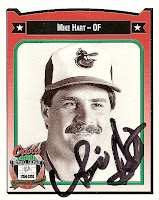 For some reason this request sat on my desk unaddressed for almost a year. Once I sent it out, I received the cards back signed in two weeks. I probably should not have waited so long.

Hubbard came to town with Fernando Lunar and Luis Rivera during the 2000 season. His tenure in Baltimore lasted only 31 games before moving on to his seventh major league club. I sent him a 2001 MLB showdown card I bought, and received this postcard in return. Either way it works, I'm just happy it was an Oriole postcard.

Last season Moeller was the one of the veteran pieces that was to pave the way for Matt Weiters' future success. Only time will tell if his and Gregg Zaun's tutelage will pay dividends. I sent to him care of the Scranton Wilkes-Barre Yankees and received my card back in about two weeks.

All it took for me to acquire this notoriously difficult signer was one easy signer, Rick Schu. It's a trade I gladly made. Now if only I could obtain a Crown card of his so easily.

The year 2000 has become a trend this week. Worrell pitched only five games for the Birds during the season. He had an awful time in Baltimore, after which he signed with the Chicago Cubs and was a rock-star. Five games wasn't nearly enough time to have an Orioles card produced, so the Giants will have to do.
at 8:54 PM