I found a hound willing to do a 50/50 on former Orioles catcher Terry Kennedy and jumped at the opportunity. Kennedy is currently the Manager of the Portland Beavers, AAA affiliates of the San Diego Padres, and apparently a good signer. I sent my cards late in April and received less than two weeks later, not a bad turnaround considering a fan got them signed for me. 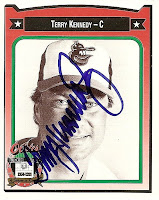 I decided to have the 91 Fleer signed because I love that set, and so do other autograph collectors. Hopefully someone out there will have a need to him and can help with my collection as well. I also have a 1988 Score card signed by Kennedy that is now for trade with the acquisition of his Crown card. Anyone need?
at 9:21 PM