It's Good to be Back

It's been a slow week for baseball card collecting, only pulling in three new additions to the collection. Life on the other hand has been a whirlwind. Work continues to push me each day and my wife and I just celebrated our first anniversary. All-in-all, it's been a great week.

All three requests were returned in less than three weeks and only Rich Amaral is a replacement autograph.

Mouton was a part of the Orioles attempt to stop their window of relevance from closing. He was not signed or traded for, but he was bought from the Yakult Swallows of the Japanese League. Lyle was among more than 10 veteran players brought in during the year to fill gaps in the lineup, rotation and pen. Mouton performed well during his 18 games, hitting above .300, driving in seven and scoring five runs.

I love this autograph. It truly pops off the orange and white. It's also quite the nice autograph. Amaral only appeared on one card as an Oriole and this baby is it. I am replacing his 1996 Leaf Signature Autograph as a Mariner if anyone has a need for it. 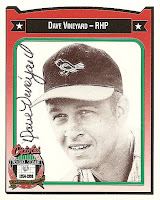 Vineyard's entire big league career came during the 1964 campaign. His major role was in relief but he did make half a dozen starts in 18 appearances. Although his "cup of coffee" only lasted 18 games, he had a lengthy nine year career in the minor leagues, mainly with the Rochester Red Wings.


A Little Something Extra:
These were sent as a protective measure, but came back nicely signed.