The last few days have been great for some very quick returns.

Saturday's Spoils:
In just four days Scott Kamieniecki signed and returned the two O's cards I have of him.

In the same timeframe I received another addition to the Crown collection, my first in about a week. I have spent some time sending out about 50 total requests, so hopefully the returns will continue to roll in. 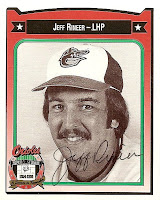 Started this week off right:
Monday I received four envelopes in the mail, from varying genres and requests.

Cormier was a member of the Orioles bullpen during the 2008 season before moving on to the Tampa Bay Rays. I sent four cards to a collector in Tampa to have two signed and returned, I only received one back signed and he got to keep both of mine. This was only my second attempt and success at 50/50 and I am pretty happy with the result.

Chris had spent time with the big club each of the last two seasons, but failed to find a home, being granted free agency in December. He is currently playing for the Nashville Sounds, the AAA affiliate of the Milwaukee Brewers. My success came in merely five days, during the season. Possibly my quickest success for a player involved in a season, not too bad. I sent him two cards so I do have an extra if anyone is looking, it looks just like the one above. 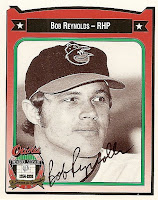 In the era before free agency Bob Reynolds moved around as much as any one player. His major league career spanned six major league seasons, playing with six different teams. He was traded for the likes of Mike Torrez, Ted Kubiak, Curt Motton and Fred Holdsworth. Baltimore was his only stop lasting more than a year, staying three plus in town. He was tremendous in relief making 106 appearances, winning 14 while keeping his ERA at 2.43. The 1973 and 1974 seasons were his only two playoff appearances, having his season ended both times by the A's. After leaving Baltimore in '74, he pitched for three teams in 1975 before his last professional season in AAA. I received my success in five days.

I can still remember when I pulled this card, it was Christmas morning of 1993 and I was opening presents at my grandparents house. This card had followed me to college, made multiple moves with me and was around for my marriage, that's a long history. And how did I repay it? I sent him away not sure if he would ever return, but he did. Again, in five days.

Postcards From the Edge:
I have begun to send post cards as protection instead of toploaders and have found that many players just sign away. It's not my intention to have them signed, but OK. When I was using top loaders I was always worried about postage so I have nixed them for the most part.

Here is what I have received:
5 Bob Reynolds 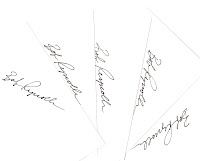 I think it's been a pretty good haul the last couple days.
at 9:41 PM