So they say good things come in 3's, today they came in pairs.

These beauties came in only ten days care of the Corpus Christi Hooks where he is the pitching coach. Driskill spent his first nine years in professional ball in the minors before making his debut in 2002 with the Orioles. His 14 years of professional pitching experience has allowed him to move into his second career, coaching. The last three years have been with the Astros minor league system developing pitching talent.

I was wary about the cards I sent having so much dark space but I like the way he signed them. I thought he would've signed over the orange but am glad he kept it over the jersey.

My next set of twins came in the same time-frame, only 10 days. The hardest part for me was finding Orioles cards to send to Scott who signs at 100%. I picked up some base cards online and sent to him as soon as I could.

It looks as if he started with a dry pen, but switched it up with his following signatures. 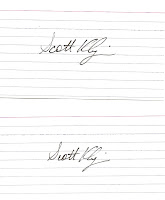 Klingenbeck wasted no time getting to the big show, debuting less than two years after being drafted by the Orioles. He started with the team the next season, 1995, before being traded to the Minnesota Twins for Scott Erickson. The trade worked well for the O's as Erickson was a stalwart in the rotation for six seasons, while Klingenbeck only made 28 appearances during his year plus in Minnesota. He emerged again with the Reds in 1998, but ended his career after a minor league stint in 1999.

If anyone is looking I have the dry autograph available or two more 1994 Bowman if you want to try sending to him.
at 8:33 AM