So, I received a trade today of six in person autographs from a fellow Oriole collector and for the first time realized he was a black guy. That is, one who uses black sharpies for autographs, of course. My brother on the other hand is a blue guy. I've never really delved into what color sharpie I like, I just want a clear signature.

I really think red sharpie should be the best. Not too many cards, jerseys and pictures are dominated by red so the sharpie would really pop on many cards. Black and blue seem to be on every jersey and background making many autographs difficult to see/read. Red would be a great autograph color, if it didn't actually look so bad. Cases in point:

Here is what I received today from Aaron, my collecting doppelganger.

Alomar should have made the Hall of Fame last year, but hopefully will not have to wait too long. There are a lot of his autographs floating around out there, but I haven't been able to grab any as an Oriole, so Indian will have to suffice for now. I had heard that he started signing TTM again last year as the HOF balloting was being done and hope that trend continues this year as I have a request out to him.

How old was Andino when this picture was taken, 16? Apparently 21. I never would have served him. He is currently all grown, playing with AAA Norfolk, trying to make it back with the big club. If not for Ty Wigginton's power explosion he may have gotten a shot to come back with Brian Roberts out. The O's need someone to set the table and be explosive on the base paths. Not sure if Andino is that guy, but nothing else has worked in the lead-off spot. I have a 50/50 in the works for a few of the players in Norfolk, so this may be an Oriole upgrade shortly. 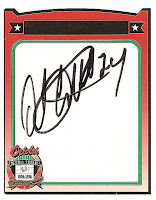 At least I think this is Alberto Castillo the pitcher, not the catcher. Any clarification Aaron? I like what he does with the blank Crown cards. I am planning on stealing his idea for a few guys without any major cards. Hope he doesn't mind. 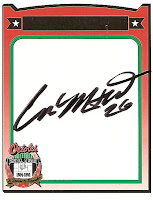 I really didn't pay much attention to the team at the end of last season. At FanFest this year I thought Cla Meredith was a minor leaguer fighting for a roster spot, not a big cog in the bullpen. I definitely know better now. He is a huge bright spot in a pen that has stabilized recently, recording his first major league save to go along with a 2.00 ERA.

Reimold is still struggling at the plate this season. My acquisition of his Topps Chrome autograph last month did little to affect his play on the field. I was sure it was exactly the boost he needed. Luke Scott and Lou Montanez haven't caught fire either allowing for some platoon action.

Almost two years into this thing and I finally got a Miguel Tejada autograph. It's about time. I am still holding out hope for a TTM request to come back, but I'm a realist. I am excited to have Miggy back in the lineup, but a little hesitant with him in the clean-up spot. He, along with Wigginton and Nick Markakis, has been the main sources of offense on this struggling club. He already has four home runs, a third of what I would have thought for the year, and has taken quickly to third base. Welcome back Miggy. Now if only they can win a few.