The Orioles haven't made any moves yet, but that hasn't stopped me. I dipped into a familiar well on this one, trading again with Aaron. I picked up a few guys who eluded me during the season and a Crown need, while giving up a few tougher signers. I think I did well.

Albers was solid in the pen this year, recording a career high in wins with five. He was a go to guy in the pen appearing in 62 games. He gives the bullpen greater depth from the right side on the mound and a good foundation in relief. I like his stuff a lot and hope he can build on 2010 to make a big impact next season. 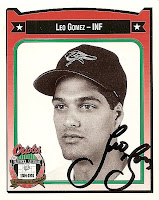 Gomez may have been known more for his over sized glasses than his play on the field from 1990-95 (of course he took them off for this portrait). His numbers were better when he was a day-to-day starter in 1991 and 1992, but fell off when he was splitting time. He was a good infielder playing on the left side next to Cal. I remember getting his autograph on a ball as a kid but then ran out of baseballs to play with so took it to the field. I know for certain this one will stay safe, right in the personal collection.

Izturis starts the trend of this trade of illegible autographs from professional players. "Cesar" is readable but the last name doesn't even seem to be there. At least the "3" is perfect.

Alright, I don't know where Millwood is going with this autograph. The "K" is sorta there, but that's it. It's fitting. A disappointing signature for a disappointing season. I for one was expected slightly more than four wins. He did lead the league in one category, losses. Ouch. I don't know why but I don't feel like Millwood will re-sign hear during free agency.

Will was my favorite player to watch during this season. The guy was fearless and tried to dominate on every pitch. It wasn't always successful but the man went for it. And then he got sent away for Rick Vandenhurk. Ohman is a free agent this year so the trade makes sense because of the money he would demand, but I liked having him back there as a specialist. He's played for five professional teams but only has cards as a Cub, so this will have to do. Unless anyone has an extra Orioles postcard available.

Wiggy was one of my first spring training successes this season, on a Mets card. No I didn't send him a Mets card, that's just what I got back. I was snuffed by him twice this season and was unable to reach him at a Wendy's fast food appearance, so trading was the only was to go. I have a 2002 Fleer Tradition Update Mets card available, need one?
at 5:00 PM