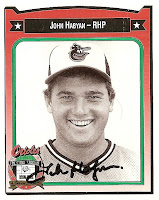 Seriously, Habyan must have just gotten his first big league paycheck before this picture was taken. Either that, or he is elated at just being asked to pose for a photograph during spring training, as a major league player. I am sure the same could be said for me had I ever been in that position. Since I have not, I will judge.

Habyan is another tougher signer, only 32% on SCN, and it only took 10 days. I noticed a trend with his signing habits though, he signs mainly in the off season. It may be out of habit or just when things slow down for him personally, but post-season baseball seems to make Habyan happy with the sharpie.

Anyone need a 1988 Fleer signed card of his? I picked it up at the National this year and is now available with this newest addition.
at 9:46 PM