Tom Dodd was the 7ht overall pick in the 1980 draft by the New York Yankees, but didn't make his major league debut until 1986. He grinded it out with four minor league organizations and a second stint with the Yankees, until being called up by the Orioles on July 25.

His career spanned eight games and 13 at-bats during his short stint in Baltimore. He registered his two RBI's on his lone home run in 7-3 win versus the Texas Rangers. That game was the only he started, mainly making pinch hitting appearances for Jim Traber and Larry Sheets. After four more seasons in the minors Dodd called it quits. 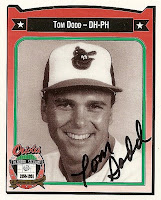 After his big league career Dodd moved back to Portland Oregon where he signs autograph requests in three weeks. Much appreciated.
at 6:10 PM