Frank Baker was the first TTM success from my last batch of 3o requests. I picked up a couple Crown sets to make up for misses I have had and those holes should start to fill in shortly. Bakers success came back in only nine days, all the way from Mississippi. 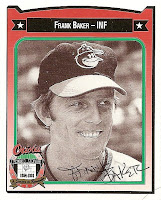 Baker was selected by the New York Yankees in the second round of the 1967 amateur draft. Three years later he was a big leaguer, appearing in 35 games and posting the best numbers of his career. Unfortunately they weren't great. 1971 was again spent in New York before being traded to the Orioles for Tommy Matchick. The change of scenery did not improve his numbers, but did allow Baker to see the postseason. He made two appearances against the Athletics in 1973 and 1974, never recording an at-bat. Following the '74 post season, Baker hung up the spikes, returning home to Mississippi to answer autograph requests of die-hard fans like myself.
at 8:24 PM