A Peek into "The Vault"

"The Vault" will be opened from time to time to take a look at my collection and reconnect with some autos from the past. I haven't been hounding the graphs for that long, so the history isn't that extensive, but hopefully it can be entertaining.

With the Veterans Committee making Whitey Herzog another Oriole in the Hall of Fame, here is a look my Oriole HOFers. 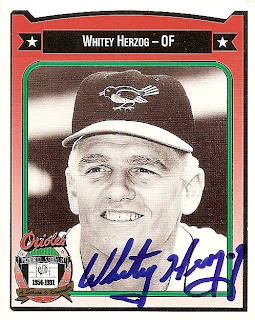 Whitey Herzog 1991 Orioles Crown #195
Class of 2010
I sent a request to the manager/player earlier this year and received a quick reply. To be honest I hadn't known he was a player before I found the set and was shocked at the speediness of his reply. I have been shocked by how big names are so easily accessible while receiving so many requests. Congratulations on being voted in, it is well deserved. 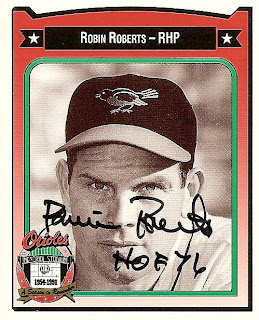 Robin Roberts 1991 Orioles Crown #384
Class of 1976
This card fit perfectly into my set, but I wasn't the one to send to him. A fellow Oriole fan and now auto collector sent to him this year and I was able to take this off his hands. We have traded a few autograph doubles from time to time, actually another one working as I write (Thanks BigSlim). I really like the inscription but was saddened to hear it cost $$$ to have him sign. I understand where he is coming from to charge but don't have the cash flow to buy all the time. More on charging for autographs TTM at a later date.

Cal Ripken Jr. 2003 Fleer Splendid Splinters Home Run Club Autograph Black #'d 215/300
Class of 2007
This came to the collection via the old-fashioned way, busted it from a pack. Here's how it went down. I was at the height of my Ripken collecting and was at the local shop to pick up some supplies. A radio interview with Cal was playing in the shop, talking about Ripken baseball and the World Series. I didn't plan on buying any cards but decided on one pack, Splendid Splinters. Ripken was on the packaging so I said what the hell. I couldn't believe I pulled a $200 plus autograph of the only player I collected in that exact situation, it was just meant to be. When I sold the collection, this card,along with my first ever Game Used Ripken escaped dismantling.

George Kell 1991 Orioles Crown #233
Class of 1983
Somehow I have lost my scan of this one. My favorite TTM auto thus far, and I couldn't believe my timing. The card showed up seven days before his passing. The auto is perfect with the inscription "HOF 83" underneath. When this card came to me it spurred my passion for the Orioles collection and has helped me grow my collection. Rest In Peace Mr. Kell.

Other Hall of Famer autographs are readily available but most are only there for buyers. I have found a great deal on an Earl Weaver and hope to add that to the collection this week. Greats like Jim Palmer, Brooks Robinson and Frank Robinson are readily available and will be here soon, but others will be a lot harder to get. Luis Aparicio, Reggie Jackson and Dick Williams are difficult to find in certified autos as Orioles, so trading or paying TTM is the only way to go. The toughest of all may be Hoyt Wilhelm who passed in 2002.

Thanks to all the players and Hall of Famers that helped to shape the Orioles into the franchise that I still love to this day.
at 10:00 PM