What was yours, is now mine.

The following cards came to me via trade with a collector on www.sportscollectors.net. It was obvious from his list that he had made a few visits to Orioles games to get his autographs. I have been unable to make it to games or Fanfest in recent years so have been relying on trades to bolster my newer player autographs. I am also getting smarter by trading for players that I havent sent to TTM. A success TTM is diminished slightly when there is already a card in the collection. As far as I know, all the cards below were signed in person. He wasn't around for long so I was expecting an Oriole card featuring him would be difficult. My main focus is an autograph on a card, featuring the player as an Oriole at the big league level. A little streaking on the signature but all-in all not a bad sign. 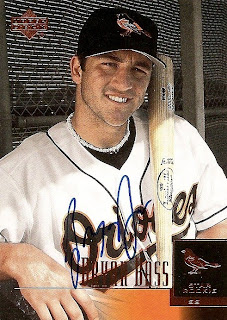 I am pretty sure this is not the BRIAN BASS that made it to the bigs, but it is my fault. Oh well, add it to the doubles list and hope someone is trying to put together the Prospect Premier set. 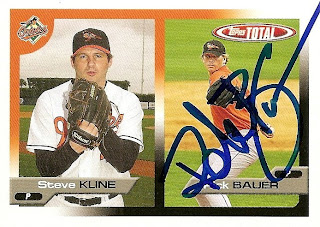 I really like the fact that this signature is really big and flowing on a small picture. He did a good job of leaving his face clear while obstructing everything else. If I do have Kline sign the other side he will have to compete to be the focal point of the card. 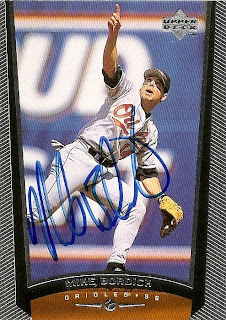 These baseball players are pros at positioning their signatures. They cover up everything except their face, unless you are Fritz Connally (see bottom of post). If it weren't for the streaky sharpie this would be a favorite. 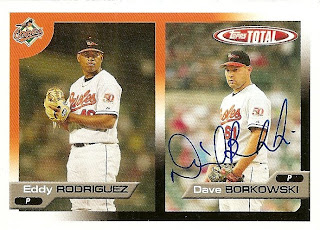 Borkowski should have taken a lesson from Bauer on the Topps Total signing. I thicker sharpie would dominate the card but he has left room for Eddy Rodriguez to steal the show. Borkowski is another player I thought I would have a hard time finding in an Oriole uniform. 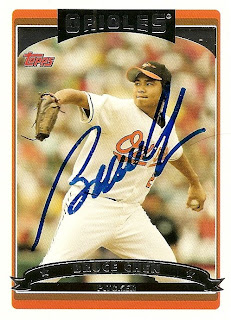 This is an overall solid signature. Good placement, okay control, not too overpowering, an awful lot like his pitching. 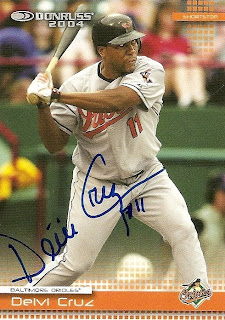 This is my favorite autograph from the trade. It is really crisp and clear and the name is very well pronounced. There isn't much more to be said, or written. 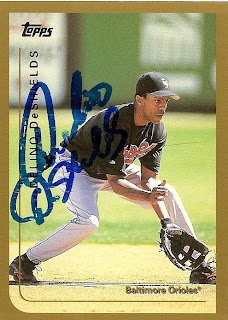 Man, I forgot Delino was ever an Oriole. I had to look it up but its true, almost two full seasons from 1999-2001. I guess I was still too busy plotting the death of Jeffrey Maier. I am still not over that play. 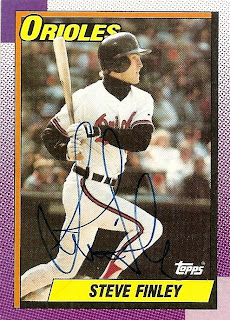 It must be hard to Steve Finley someone in person. There is no mail to open, request to disregard or stamp to waste. That must be how this card was signed. He is a notoriously tough signer, especially TTM so I had to jump on a chance to get an auto. 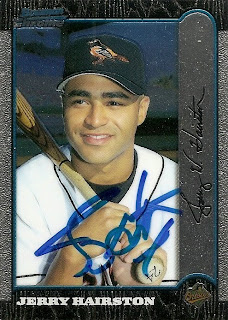 As far as chrome sets go this one autographs very well. A little bit of baby powder goes a long way in allowing these signatures to pop. His signature looks nothing like his name but you can clearly read the chicken scratch. 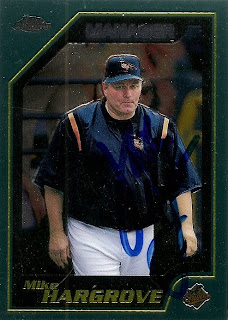 OK, so he never played for the Orioles, but managing counts. These cards seem awful for autographs, chrome and a really dark background are not ideal for signing. Hargrove didn't do me any favors signing directly on the black jacket, couldn't he have just signed on his pants? This is a great example of how a signature can change. The blue sharpie over the fascimile signature could not look any different. At least the J's are pronounced at the beginning of each name. Time and a high number of requests seesm to change many players autographs from when they first sign to when they are in the majors. 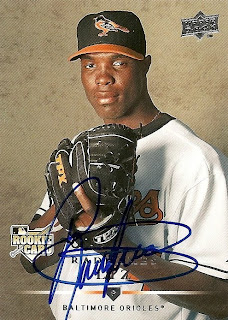 I am a big fan of this signature. Not much more to say. 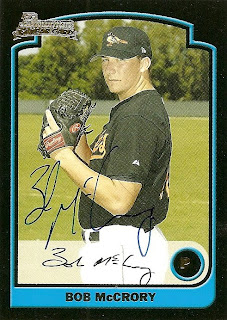 I don't know much about Bob McCrory. What I do know is a 16.46 ERA for his career makes it easy to forget his name. Hopefully things will be getting better for him. 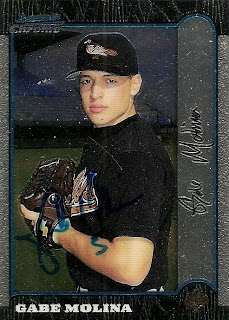 Maybe I spoke too soon with the 1999 Chrome set being good for autographs. This autograph seems a little blurred. Maybe a little more baby powder would have been better, but the black jersey doesn't allow for the blue to show well. 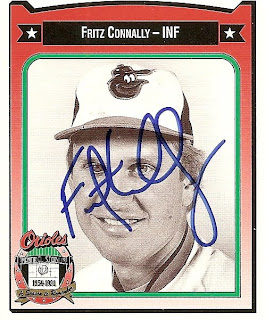