So yet another trade for some players I need. I had to give up Al Bumbry, Bob Bonner and Dan Ford doubles to receive three players that didn't have long tenures in Baltimore and I was happy to do it. 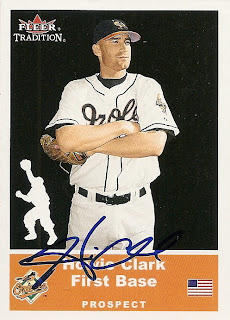 Howie played 14 games for the Orioles in 2002 and came back for another seven in 2006. His overall numbers weren't bad, but he just couldn't find a spot on the team. He bounced between OF, DH and 1B during his two tours in town. 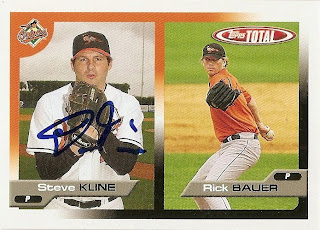 In Baltimore Kline is better known for disrespecting the city and fans then for pitching. He put up pedestrian numbers while in town and called fans here stupid and classless. He also bashed his teammates within the first week saying he was used to better players backing him up and fixing his mistakes. Oddly enough once traded to the Giants he became a fan favorite. I guess he learned to be a little more tight lipped. Can anyone read what his signature says because I am pretty sure it isn't his name? It looks nothing like Steve Kline. 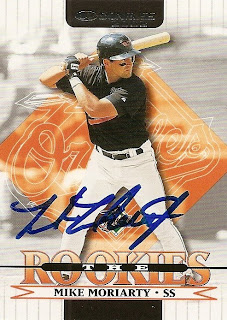 Moriarty has the distinction of never making an error in his big league career. Unfortunately that was only eight games with the Orioles in 2002. After he left Baltimore he bounced around the farm systems of five other clubs. He made his way back to the Orioles organization in 2005, but never made his way back to the major league infield. I was very surprised to find a card of his as an Oriole because he wasn't around long and wasn't a highly touted prospect.

Taking on a project like this one I realize that one of the hardest parts may be to find baseball cards of every player as an Oriole, let alone to get it signed. Free agency, rule five draftees and a large minor league system have allowed for a lot more players to reach the highest level, if only for fleeting moments. This makes it much more difficult to have major cards produced for every player on every team.

When I first took on the project I had to do a lot of guesswork to try and find the cards I needed. In walks the new Beckett.com. I have never been a big fan of the new site but being able to see card fronts in the gallery view has made things a lot easier. I can actually put together a want list for cards I need to send TTM. It has also given me the ability to tell when players have never been featured as an Oriole so I don't have to chase a ghost. I still don't feel like the site is user friendly for collectors but it is getting the job done better than before.
at 7:41 PM