I have been following Chris Potter Sports for a while, waiting for the opportunity to get involved. Then, a few months ago, three players aligned at one signing and I had to make a move. 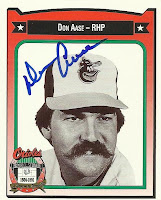 Aase has held a spot in my collection from the beginning. He was one of the first cards I traded for years ago and now that 1987 Topps card is available. Aase was once a consistent TTM signer but his habits have changed over the last few years. I felt cornered I needed to pay for his signature on a Crown card or never get it.

Mike does not sign TTM. I could only find two recorded successes over the last decade. I definitely didn't want to waste stamps. I was expecting his cost to be a little higher, given his propensity to not sign. But his cost was reasonable and it was a no brainer. 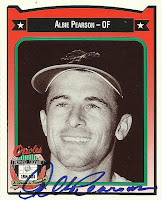 My history with Albie was documented here in a post about the 2010 National Convention. I had heard he wouldn't sign the Crown card but apparently when paid he is less discerning with the signing tastes. He was my main reason for getting involved in the signing. I think it was a $45 well spent, you?
at 8:10 PM